The yearly cycle has begun. For an industry that works so hard and shows so much potential, 2023 is the year that will show if indeed the global commercial potential is real and not fumes of dreams.

As we begin our coverage this year, it is a must to discuss what this year hopes to bring. 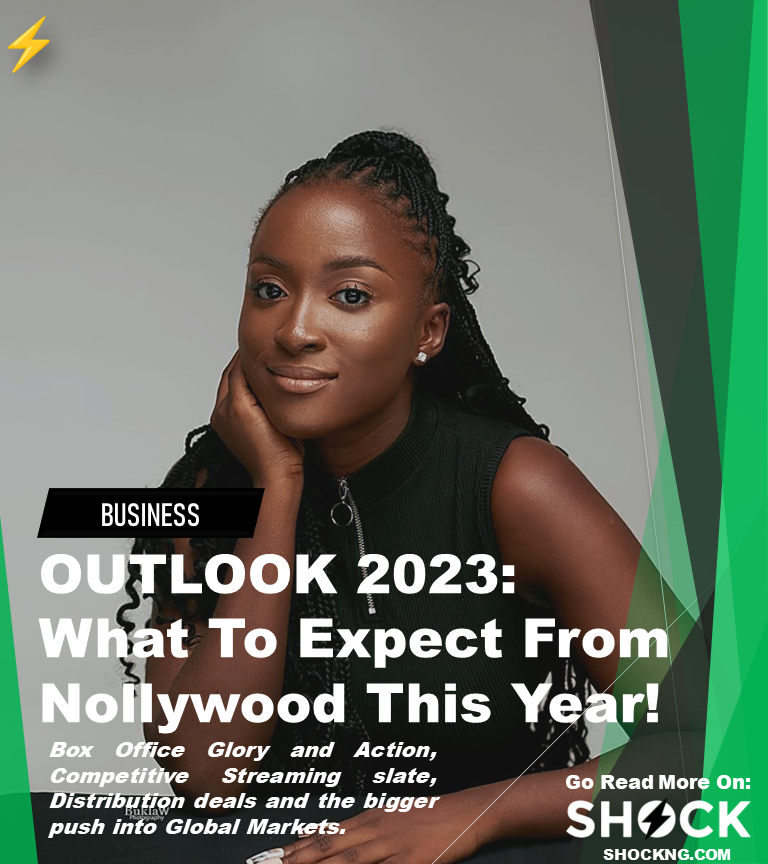 There is so much coming to the big screens this year, however, there is a fear of what happened in 2022 might take place again. The drought of N70-N180M titles – now known as the mid-tier hits.

Of course, the noise of King of Thieves, Brotherhood, Ijakunmo and Battle on Buka street overshadowed the grimness of the above, producers should be ready to fight even harder with better products and roll-out strategies to avoid this drought. 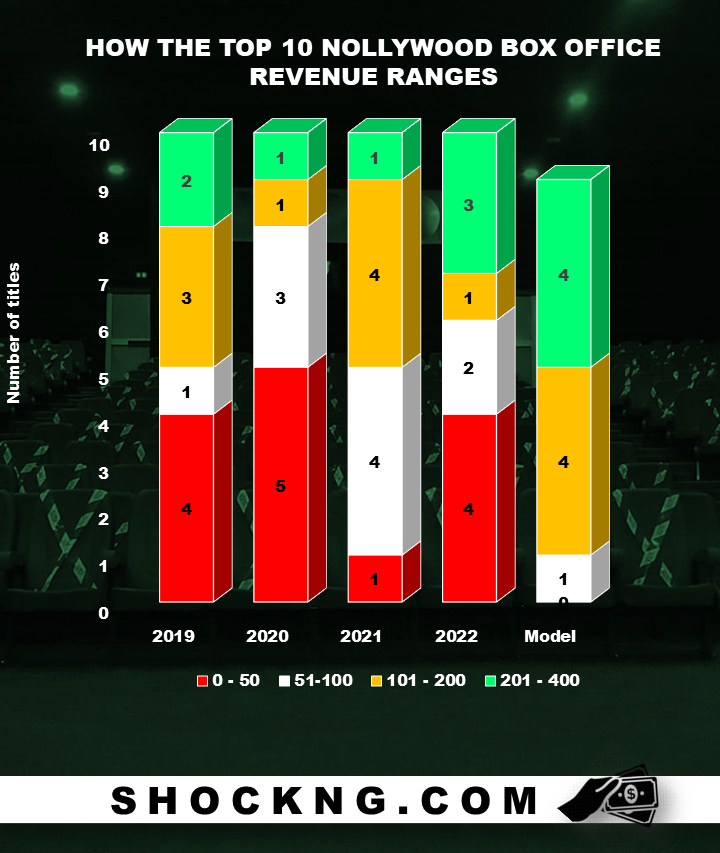 At this point in the industry, titles with less than N50M should not make it to the top 10 list at all.

They should rather be filled with hits above N100M.

Why? The number of mid-tier hits made by local titles shows how competitive it is in the market. Based on the above data, Nollywood titles, overall, were not competitive in any form at the 2022 box office.

International streaming platforms Showmax, Netflix and Prime Video in 2022 made tangible efforts to push Nollywood into global demand via its platforms.

Showmax: After a hit unscripted show, showmax made a content splash for Nollywood that roared to life in Q4.

From Diiche, Flawsome, Crime and Justice Lagos and Wura, a telenovela led by Scarlet Gomez. The streaming service has quickly become a strong contender in the local stream wars.

2023 will see how the market is really feeling about this push as the service has two Big brother franchises to pull eyeballs to these titles.

Netflix: Blood sisters, Glamour girls and Anikulapo went global in over 50 countries. The streamer also launched its first Young Adult series that became an instant hit locally and gave the industry new stars to work within 2023.

Based on the top 30 Nollywood data, it is very clear that Netflix relaxed its licensing spree and might have lost out to the competition on titles available.

Prime Video: After signing an output deal with Anthill and Inkblot, a first picture deal with Nemesia studios and an Overall deal with Jade Osiberu. Whilst the output is already yielding results, the rest of the deals will be more in focus this year and perhaps more output deals signed with studios. 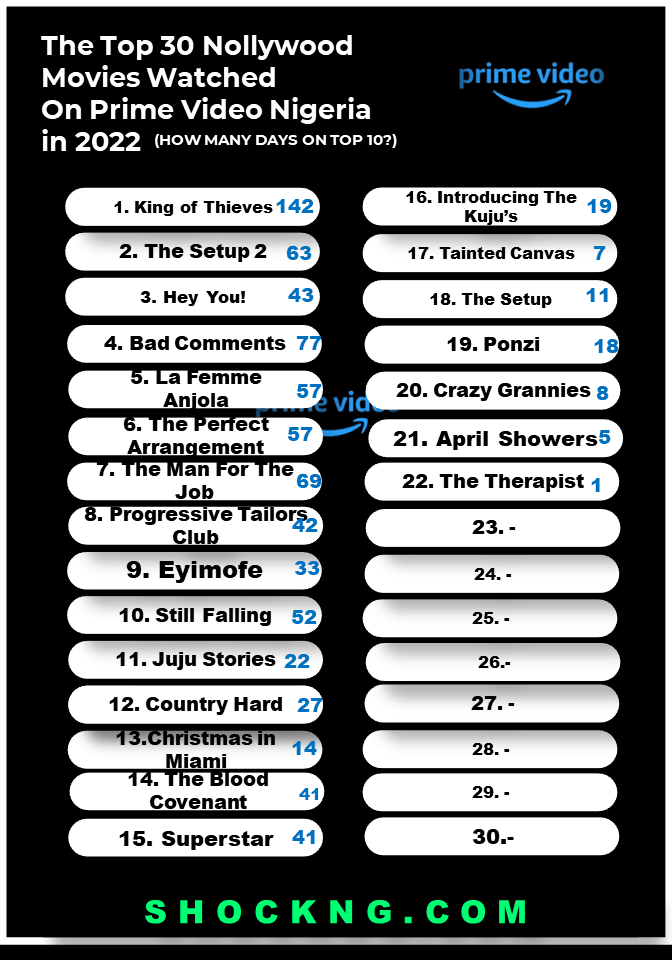 Disney: It is still unclear if the Cinderella juggernaut will commission titles from Nigerian creators to push its market entry strategy. For now, there are only two titles in play. “Iwaju” animated series and the Madu documentary co-directed by Kachi Benson

HBO: Word on the street is that HBO execs have been setting up secret meetings with top-tier creators from Africa to launch a high-concept limited series. The global recession might have impeded talks but let’s see how the year runs. Fingers crossed for the announcement.

Canal Plus and Paramount Plus have 2024 plans with the latter snagging Busola Komolafe from multichoice to lead acquisition efforts and the former still executing in South Africa via a co-production agreement with Showmax.

2023 continues to be an exciting year for Nigerian talents. The African crossover has begun with Tosh Gitonga’s Netflix original “Disconnect 2” featuring Wole Ojo and Meg Otanwa.

More dedicated Nollywood funds might be inked this year.  In 2023, we are tracking 4 funds.

The Film One $1Million Fund: Launched in 2021, it is the first-ever international capital fund created specially for investment in Nigerian films. Core investors in the $1 million fund are Huahua Media, and Empire Entertainment (South Africa).

The Anakle Fund: Set up in 2021, the fund seeks to help younger filmmakers realise their own projects either by “buying the IP or funding what they are doing”. One of the younger filmmakers they are working with is Akay Mason, the director behind the time travel film Day of Destiny, critically-acclaimed Elevator Baby and recently recently-released Superstar.

The Business of Nollywood: Looking Back at 2022

2022 was the year of the announcement.

Every month, the industry was encumbered with milestones, exciting industry directions and new records all driving up the business of film and TV in Nigeria.

Here are the headlines that caught our attention and would have an impact in 2023/2024.

Film One Unveils slate of indie Film and TV projects.

Damilola Orimogunje “For Maria” is licensed to “All Blk streaming” for US and Canada regions.

King of Thieves finishes with a record hit of N320.80M, and heads to Prime Video.

Disney Plus sets “Madu” documentary,  revealed to be co-directed by Kachi Benson.

>> The 6-part series is set in the UK and Nigeria, with the story unfolding across 2 timelines: the present day, and the 1967-70 Biafra War. pic.twitter.com/QlbKcI2Ywa This is what the shock team hopes to cover this year.

Give us the smoke, bring us onboard your projects and let’s write down industry-changing headlines.