Late 2019, before the coronavirus brought the box office to its knees, Nollywood screened one of its biggest movies yet – Sugar Rush.

The film which was a Jade Osiberu comeback screened locally for more than 8 weeks and soldiered on to gross N287.06 million naira in ticket sales.

Bobola Oniwura worked on this project as a film colorist and in this interview, he spoke to us about his creative journey.

He also revealed to us how color grading is a direct consequence of a “kodak engineer “who invented the digital camera in 1975. 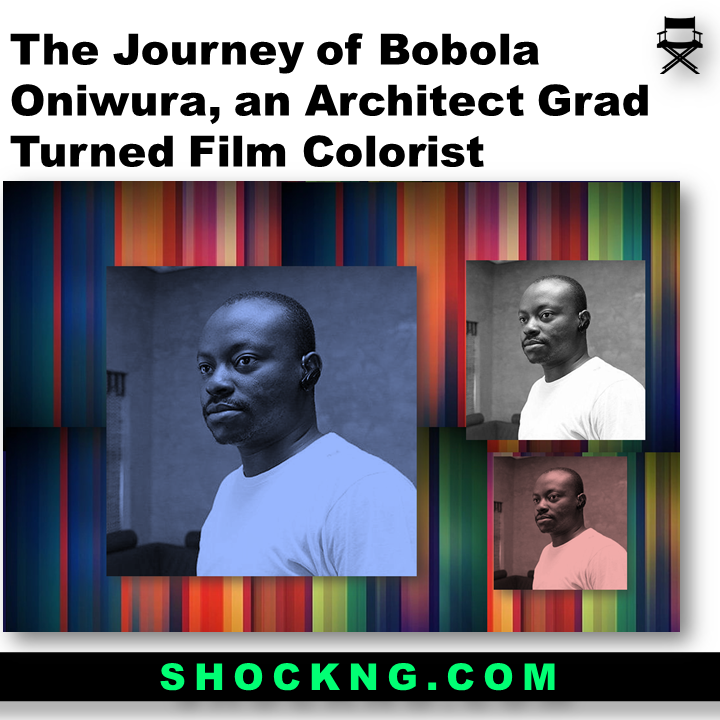 Hello, my name is Bobola Oniwura, a film creative and colorist based in Lagos Nigeria.

I am a Davinci resolve certified trainer and a member of the colorist society international.

I grew up in Lagos Nigeria. Got a degree from Yabatech in architecture back in ‘06.

Practiced for a while and then started a digital marketing company that birthed AfriNolly.

Now I am independent creative working on color grading big projects amongst other things.

How did you become a film colorist?

My journey was quite accidental.

In 2013, I was creative director for AfriNolly. we had a discussion with a number of Nigerian producers on what was a big filmmaking challenge for them – color grading was named as one of the big challenges.

The look and feel of the films that were producing was not on par with Hollywood and to achieve this quality of work, the investment in it was very expensive.

AfriNolly looking at this situation invested $31,000 and placed two of our in-house editors on it, learning the magic of color grading.

One year went on and they couldn’t achieve the magic. I was taken aback and decided to take a hands-on approach to figure it out.

The console was downstairs and I relocated my office permanently there to learn.

And that was how I became an accidental film colorist.

Did you get clients after this investment?

They send producers who have borrowed money from them to us and then we became the post production partner for them.

Before I left, I worked on two big budget films.

One feature length was shadow party by Yemi Amodu. 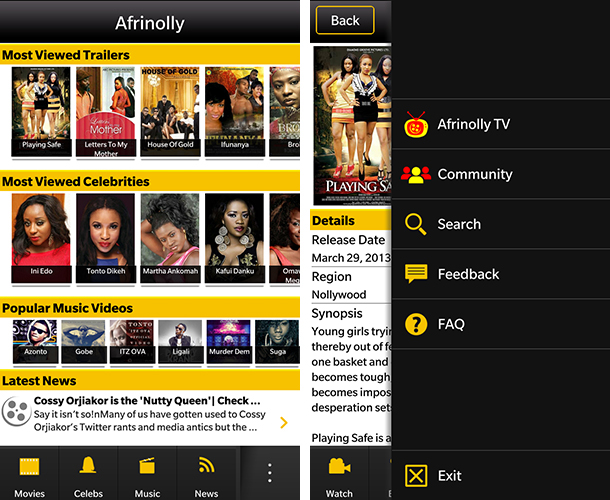 What Fans connect does is to promote brand ideas to youths using passion points such as football, music and movies.

That same year, Samsung launched a developer challenge and our company entered this challenge with an app we designed.

We won and got N 1 Million as a prize.

In 2011, google launched an android developer challenge for Africa.

This was the competition we built Afrinolly for and it won in the entertainment category – $25,000

The app was positioned to be the IMBD website for African movies as they have little to zero information about the movie industry that surely exists in Africa.

If a film didn’t go to a festival abroad, you won’t find information about the movie.

We created this app and we became the biggest data base for films made by Africans, and film practitioners from Africa.

This was what we used to win the competition. Fans connect gave birth to Afrinolly.

In all of this, I was creative director doing all of the UI/UX, handling social media and engaging users.

When did you become independent?

Curious to know why you left?

Ah – long story. I am not ready to share this

So, yea. a disagreement?

Maybe when I am writing my auto biography you will read it there.

Did this huge shift work out for you?

Its been good. God has been faithful.

The biggest project in my careers came after this shift – Sugar Rush and Merry Men 2.

How did you get to work on the sugar rush project?

The Producer reached out to me about color grading the film on recommendation and the rest they say is history.

Was there anything in particular that the production did to get such good visual frames?

The cinematography was great and the production design made the scenes quite colorful.

So, I will say the various departments did a great job under the supervision of the Producer who has an eye for quality.

But without the production design and a good cinematography those scenes you enjoyed, how vibrant they might not have been so.

Why do you think the film did so well in Cinemas?

I feel the audience can relate with the story and more especially the characters.

How coming into money can change the way people behave and all the various elements that had to do with the source of the money.

The Nigerian audience related with the story which was embodied brilliantly by the amazing casts and well directed.

That there was also no dull moment from beginning to the end. 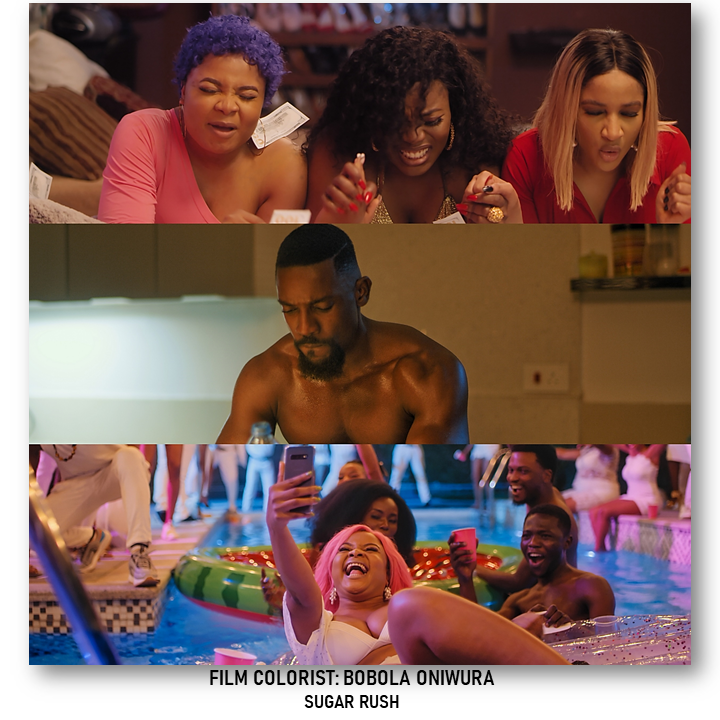 Over 7 years working professionally in this field, why is it important for filmmakers to color grade their film?

The switch from the use of analogue camera to digital camera in filmmaking presented the need for color grading.

Whilst Hollywood made use of analogue camera and did not quickly embrace new types of camera, Nollywood filmmakers adapted to the use of digital camera as a cheap alternative for all their projects.

This means that today, most of our films are shot with digital cameras and the output this device gives is a log/raw format.

All of this makes it imperative that our films must be color graded after being shot with a digital camera so that the colors, the tone and the story can be enhanced and well communicated to audiences.

What factors determine how you charge a Nollywood Filmmaker seeking to color grade their big budget film?

How much I charge depends on the length of the film.

What was it shot on?

Am I grading it in your studio or in mine?

What delivery timeline are you looking at? Do you want to hurry me up?

Are you facing a tight deadline that I have work 247 to complete your work?

I put all of this into perspective for me to give you a quote.

Yea, there is a range for cinema films – From N600k to N1.2 Million and above

Ah – this is quite expensive?!?

No. This is ridiculously low.

Compared to my international colleagues in south Africa, America and Europe.

In the US, Colorist studios charge per hour which is set to $500

A feature week takes around two weeks to color grade.

For Cinema Exhibition, I think it gets better annually.

The more screens we have, the more money can be made.

Hence, we have films breaking records like omo ghetto.

Mind you this is just one window of distribution.

I feel if you get your story right and execute well, then your money can be recouped.

What do you think is the major consequence of not grading a film properly?

If a film is not graded properly, it repels the audience.

All of this distracts them and gets them frustrated about paying to watch it on the big screen.

This is a major consequence.

Hence by all means, color grading must be done properly.

Does using different camera for production affect your process of color grading?

The color science of every camera is different.

If there is a camera change, I have to be informed during my brief with the director and DOP so as to understand what i am working with.

The way a canon sees and interpret color is quite different from the way another camera would.

What’s a proxy file and how does that help color grade?

A proxy file is a reduced resolution file size of the original footage that easily plays on the timeline and used for editing without the editor experiencing slowdown or crashing of the project.

When editing is fully completed and a picture lock is ascertained by the director, the raw files are relinked to the proxy files for replacement, which is then color graded.

What software do you recommend for color grading?

But for Davinci, you just pay once which is $300 at the moment.

Share a grave mistake you have learnt from working on a project?

I had already rendered an entire film for more than 15 hours and the file was not opening in premiere pro.

The mistake is that  when i was exporting on resolve, I didn’t turn on the “premiere pro” icon.

It was a terrible experience. I almost cried.

Had to start exporting all over again.

Is this your major source of income?

Getting other side jobs such as ui/ux design and consulting on creative projects are there too.

I think it depends on the way you look at it but I’ll say music video.

Shorter delivery time means I can move on the next one as fast as possible as opposed to long hours working on just one feature project.

Currently streaming “the one” on Netflix about people searching for the love of their life using genetic science.

Color grading is that final stretch of work you put in a film to make the audience appreciate what you have done and the investment that made it possible.

If you don’t color grade properly, the audience might not be excited by the picture and you really don’t want that.

Thank you for your time.