In 2019, I took a visit to Pinewood Studios in the UK. During that visit, a studio executive in a conversation with me said something that I couldn’t stop thinking about.

“Americans come to the UK to shoot films because the UK has one of the highest pull of technical expertise: from directors of photography to focus pullers, down to runners. How many London-based directors do you think work on a Hollywood film?” 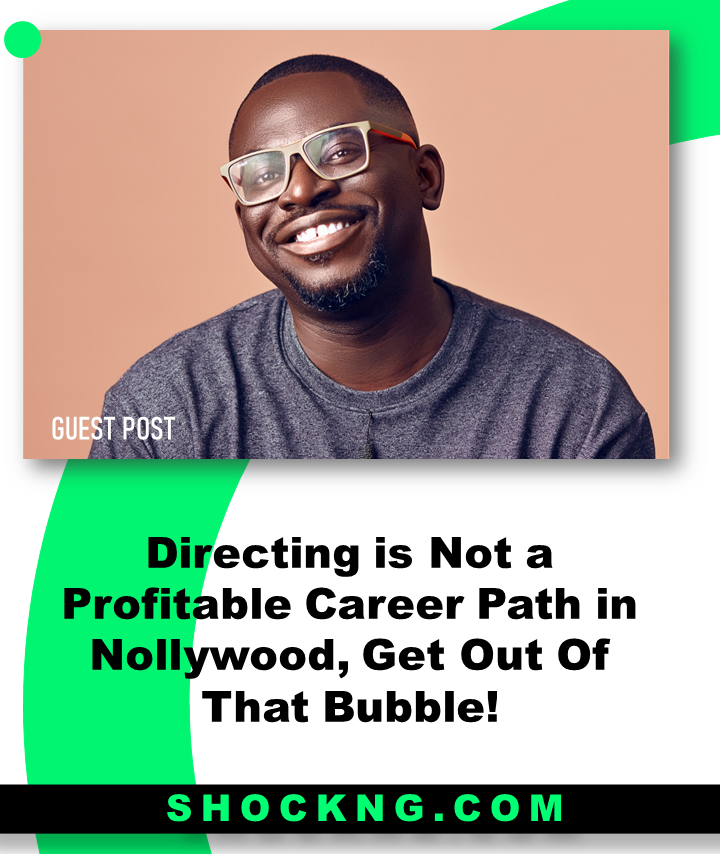 Right now, if Netflix wants to do a show in Nigeria, they will bring technical expertise from South Africa or the UK to do the job. It is clear that we don’t have enough of these skills here. We need to fix that.

The big idea: We need Nigeria to be the hub for technical talent – just like the UK.

Directing is not a profitable career path in Nollywood. Aside from directing, there are many lucrative careers young people can focus on in Nollywood. That’s why I’m writing this article.

These career paths can help you survive while trying to be a director and you can focus on that. Be the best in the industry. Later on, directing can be something you take on. 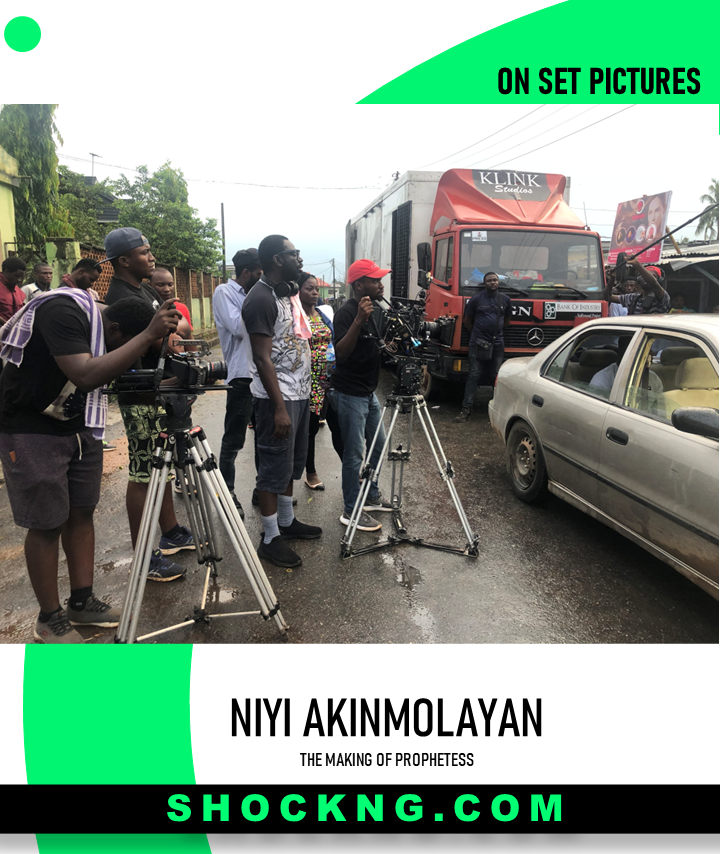 When you’re coming up in this industry and you have decided to be a director for hire, you need to understand that it is very hard to be successful if that’s the only thing you do.

Using my career as an example, Directing wasn’t the only thing I did for years. I was an editor, VFX, writer, and also into documentaries, graphic artistry, and all sort. By the time I became a star director, I could do it for joy or for strategic reasons.

Directing doesn’t pay enough, and that’s why I’m always particular about discouraging young people who say they only want to direct.

Also, most times, projects are not set up in a way that allows directors to be on top of it. Sometimes, all you just do is direct on set and the producers or owners of the film figure out how to finish the film.

In terms of having a successful career, you have to combine a couple of things with directing. Take for instance, Kayode Kasum is a director but also an editor. He does documentaries and handles television commercials. For you to do that, you have to be a bit diverse in your reach and be open to leveling up your expertise.

It cannot be overemphasized, If you’re a young director, make sure you have some additional skills. Skills that are lucrative. Whether you love directing or not, get skills that are in high demand.

Be smart. Get out of that “directing bubble” and learn.

So what are the skills Nollywood is looking for right now?

CINEMATOGRAPHY: In the crew chain right now in Nigeria, the most profitable profession in my opinion is cinematography. Cinematographers always have work. They can be called to shoot an advert, documentary, feature film, TV Show, or even a travel vacation series.

Barney started his cinematography journey by watching one of my videos. I made two videos on basic cinematography. Then he applied what he learnt working as the second camera unit in Elevator Baby.

I liked his work and told him if he could do a great job in Day of Destiny I would give him a full camera. He did good and I brought him onboard “Prophetess” as DOP and the rest is history.

EDITING: Beyond the fact that editing actually makes you a better director, it is almost like cinematography because people will always need editors. Being an editor is not as profitable as cinematography because your work is done on a computer and people can price your service anyhow (if you allow them). But it’s not something anybody can do easily.

This skill is very important because it is hard to duplicate by producers and film owners.

A producer can get angry and yank off a director from a project. This has happened many times. But can a producer wake up and decide that they are going to Edit their film? Not Possible.

SOUND RECORDING/DESIGN: It is funny how our number one problem in Nollywood in terms of technical problems is sound. You’ll expect that young filmmakers would learn sound so that they can utilize that opportunity.  But it is very shocking that almost all the big project so far are being handled by few individuals.

If any young woman in this industry asks me “how can I join Nollywood?”

I’ll definitely recommend this profession. I feel that women have more patience; better hearing and they’ll be able to do it.

One thing about sound people is that their fees can be quite pricy, especially if the clients know how important sound is to a project. This level of sound expertise should be at the film recording level and post-production level – I can bet if you are good, you’ll be sought after in Nollywood.

FOCUS PULLERS: Do you know that focus pullers get paid as almost the same fees as DPs ?

On a film project, a focus puller can earn between five hundred thousand naira and one million naira on a typical two-weeks project. Both the DP and a focus puller are very essential to getting good takes that are cinematic. This expertise pay well and is in high demand.

GRIP WORK: If you have the energy, grip work is another route to go. The industry is beginning to tell stories that have more challenges in execution, hence expertise in the area would be needed more.

The first time I got paid more than five hundred thousand for a film was Wedding Party 2. Imagine the number of films I had done prior to that.

SPECIAL EFFECTS: Right now, when you think of special effects on body parts, there’s only one name, Hakeem Effect. This shows there’s a vacant space there for more people to take up.

The good thing about special effects is that men and women can do it. The above mentioned skills might be a bit tedious on women. Special effects is an opportunity that doesn’t require muscle.

For every project that you say “yes” to as a director, there are always consequences.

Good or bad, this ultimately shapes your career, your worth in the face of new clients and most definitely your earning power.

The good brings the audience and critics to receive your film positively. You are praised. More opportunities come your way and you feel ready to take on another one.

But what happens when it goes bad?

When a director release a new film and people hate it, they will most likely attack the director. The audience will drag your name and the critics will label you incompetent.  Potential clients would see this and may rethink working with you. Mentally, you are crushed.

In all of this, you are really the only one that takes the blame. Key crew members that worked on the same film will go on to work on another project almost immediately. You as the director, are stuck, in this mess.

Nobody says… I wont hire this DP/Sound guy or scriptwriter because he/she worked on this project. It is all on you.

My point in all of this is understanding what happens when you become labelled as “Director” – This career (that doesn’t pay well)  is a path that is highly dependent on people’s responses to the final product that credits your name as director.

In terms of getting in, there’s no need to worry about the money. If you want to get in, focus on getting your work where it’s impossible for people to deny it. Your outstanding previous work will get you new work that pays.

The good thing about the industry is that your work speaks for you. I don’t think anybody hires anyone and asks for your CV or who taught you. it is always about what have you done before?

Whatever route you go, ensure you put that learning into practice and be the best.

People who genuinely own a film are indie directors who put their money, energy and time into the film.  For Anthill Studios, we like to give the directors everything, integrating their creativity from start to finish.

Most young directors think that once they are signed by a studio to direct a film, it is automatically theirs. But they eventually learn the hard way that it doesn’t go that way.

Also, when a star is the executive producer of a project, that particular person supersedes every other person creatively, and that’s the Nigerian setting.

There’s no right or wrong approach. It’s just positioning the film in a way that it benefits the film the most.

Nollywood is still small. What I mean by that is that our output-to-success ratio is low. You can be making one million films a year. If only ten out of the one million are successful, that’s a small industry.

Nollywood is really just getting started, and now more than ever we need more talents with professional technical expertise.

While it is fine to want to sit on that chair, if you’re starting out, know that the route might not necessarily be a profitable route.

Young Directors are broke. Even the directors of some of your favorite movies are broke.

Hence my advice for young filmmakers reading this, invest on building technical capacity and your career will be profitable.

Ayinla - From Box Office To Netflix: How It Turned Out To Be A 2021 Big Screen Underdog