What does Sugar Rush, King of Thieves and Brotherhood have in common? Bangerr!

Using data from these big screen hits that have proven to be consumer favorites, here are 8 data insights that might help you as a film executive who wants to make the next commercial hit that will shock Nollywood. 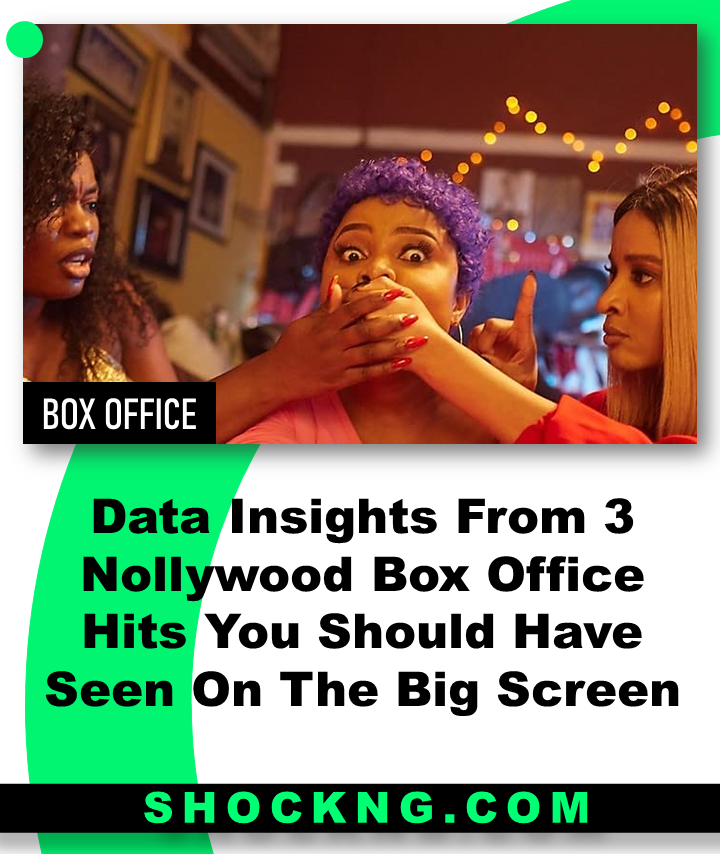 After its release on the 25th of December 2019, Sugar Rush, produced by Jade Osiberu, had a weekly opening of N92.56 million naira. This was an impressive way to start and the fact that a festive season was chosen for its release must have contributed to the grand opening.

Prior to that, the movie grossed N41.09 million in its opening weekend.

On the other hand, King of Thieves, a Yoruba epic movie, released on the 8th of April, grossed N69.23 million after its first week. The title made N42.97 million during the weekend. This outstanding performance for a Yoruba title might have been because it was released during the Easter period. But notwithstanding, it’s such a remarkable feat for an indigenous flick.

Launched on the 23rd of September, Brotherhood, produced by Jade Osiberu, opened with N53.23 million. Over the weekend, it grossed N31.37 million. The action film made impressive figures even though it wasn’t released during any festive season or major holiday.

From the three films, we might want to say that aside from the quality of the movie being released, together with the publicity given to it, the time of release also determines how a title will gross in its opening week.

King of Thieves was released on the 8th of April, and this was a week before the Easter holiday and three weeks before the Eid-al-Fitr holiday. By releasing the title before the holidays, there were spikes in how the title grossed in Week 2 and Week 4.

This shows that producers do not necessarily have to target holiday periods to launch their products. Pre-holiday dates can be set, as seen in the case of King of Thieves.

Movies at the box office are used to getting released on Fridays. A week at the cinema starts on a Friday and ends on a Thursday. In the case of Sugar Rush, however, Jade was smart to sell Christmas day (a Wednesday) as the release date. This contributed to the reception the movie enjoyed in its opening week.

Sugar Rush is not the only film in the history of the Nigerian box office to begin its run on a Christmas day. Omo Ghetto: The Saga by Funke Akindele was released on Christmas day, but unlike Sugar Rush, its release date fell on a Friday.

Brotherhood was released a week before the Independence Day holiday. That week, it grossed N52.2 million. After the independence holiday, its figures rose to N62 and N61 million in Week 2 and Week 3 respectively. The title benefited from just the Independence holiday while Sugar Rush and King of Thieves benefited from two holidays. This explains why there are more rises and deeps in the Sugar Rush and King of Thieves representations. 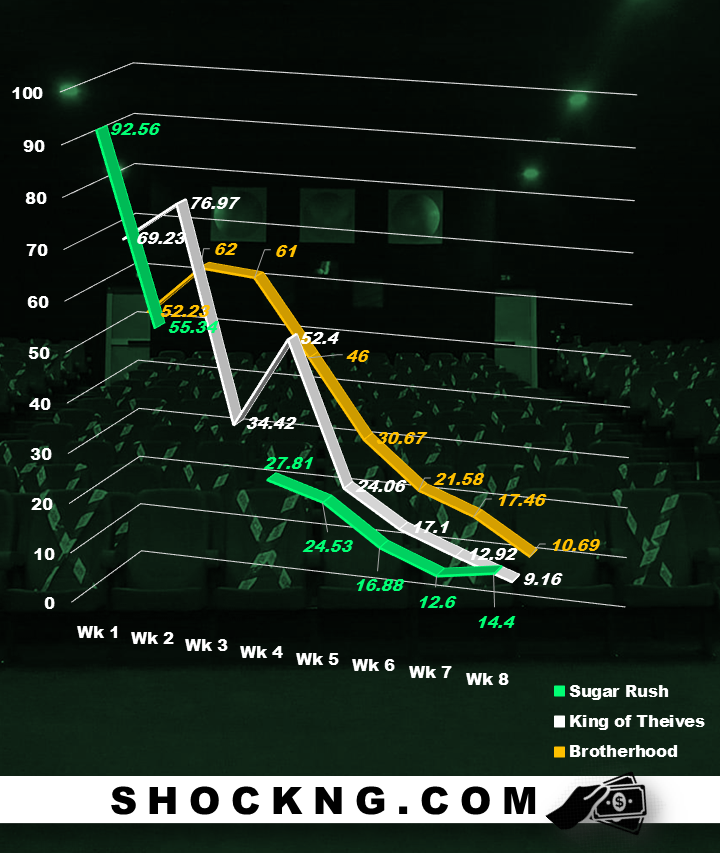 5. Minimal and steady drop for Brotherhood

For a long while after its release, Brotherhood continued to rank as the second movie on the leaderboard behind The Woman King. It kept on earning steadily.

In Week 5, when Black Adam was released and took over the number 1 spot from The Woman King, Brotherhood still did not lose its position as the number 2 movie. Though it continued to fall due to the formidable competition it had, its fall was not as drastic or devastating as generally observed in other titles.

When Black Panther: Wakanda Forever was even released, the title did not lose its position as the second movie. This might have happened because the audience of The Woman King is the one that left for Black Adam and later left again for Black Panther: Wakanda Forever. Brotherhood has its own audience who has stayed faithful to it through the course of its stay. This is why its week-on-week drop has been minimal and steady.

Due to the Christmas and New Year holidays, the December period at the box office always experiences an influx of moviegoers. This is why producers usually jostle to have their products on the December slate at the box office, but only a few movies are fortunate to make it there. Among the three films under examination, Sugar Rush happens to be the only movie that enjoyed the December perk. Its launch time must have contributed immensely to the successful opening it had.

Aside from the period that a movie is released, there are other factors that can contribute to the performance of a movie. The quality of the movie and the PR given to it are two of the factors. Brotherhood and King of Thieves enjoyed the two factors and saw results. It is interesting to see that the two titles that were not released within the December window performed better than the title that was released during the December period.

Sugar Rush is an action-comedy movie that came to the box office with hopes so high to win big at the box office. And indeed, it began its run on an excellent note. After its first three weeks (the weeks before its suspension), the film had made a total gross of N165.89 million.

According to the Nigeria Film and Video Censors Board, in a statement on its Facebook page, the film was suspended because the temporary approval given for its exhibition had expired. 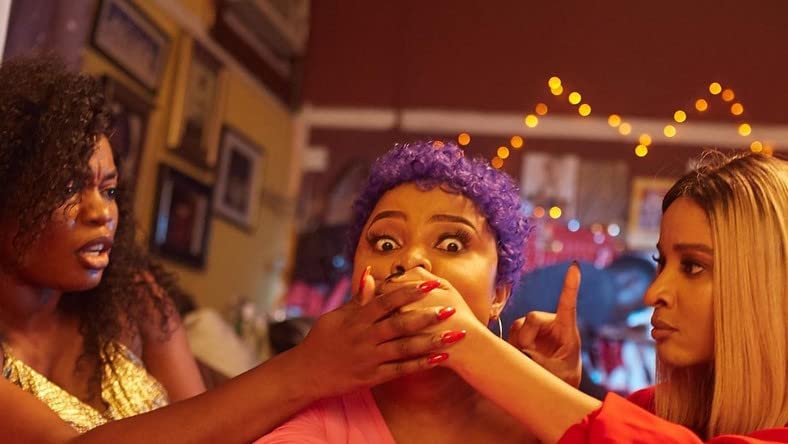 The statement reads, “It has come to our notice that #BringBackSugarRush is currently gaining momentum on Twitter with many speculating a ban on the movie “Sugar Rush” and presuming the supposed action as a sign of the government’s intention to stifle creativity.

“The movie has not just significantly increased box office revenues within a short period but has improved our cinematic culture which is a sine qua non for attracting the investment we so much desire as a nation.”

This response from the board is contrary to popular speculations that the movie was suspended because it gave a certain government agency a bad representation.

It was feared that the movie might be recut by the time it’s coming back to the big screen, but this did not happen. However, the experience gave the movie a free PR which helped in pushing it above the N200 million bar after two weeks of returning. In the first week after its return, it made N27.81 million to sum its gross cume to N194.21 million. After two weeks (now five weeks in total), it had grossed N211.17 million.

Based on the above data and insights, the release date of a title goes a long way in determining its overall success.

Though product execution and marketing are key factors in how a title performs, the strategic release date that a producer chooses to launch their product is much more significant. 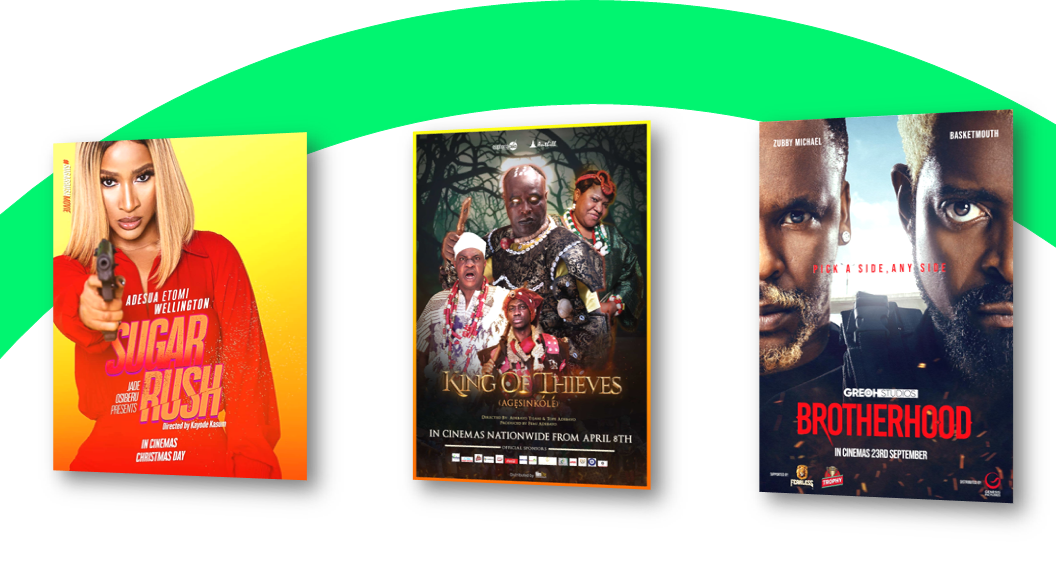