The Smithsonian National Museum of African Art has laid out its events for the +234 Connect festival with an aim of celebrating Nigerian culture and creativity. 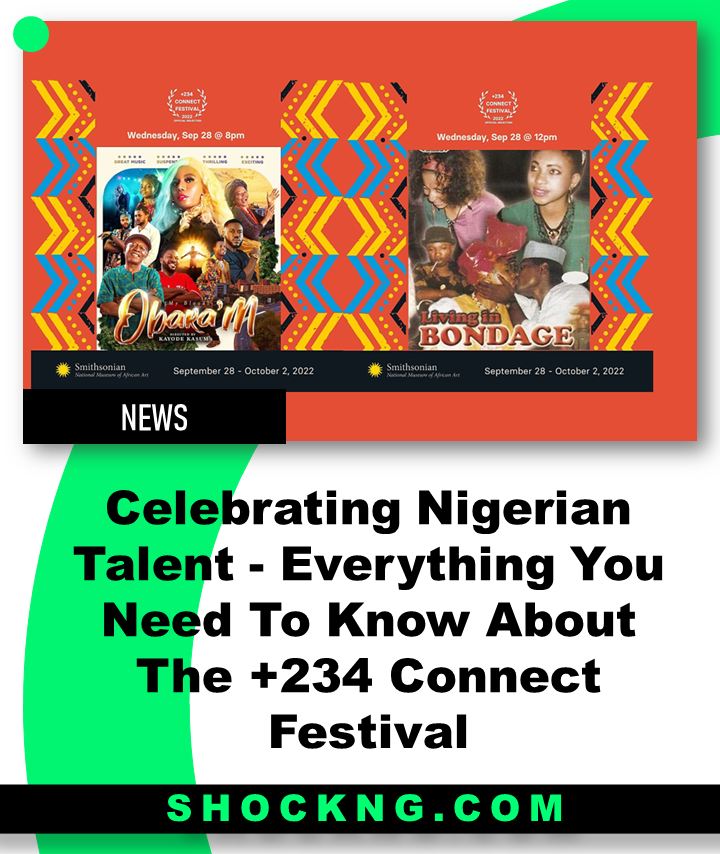 The Smithsonian National Museum has announced that it will host a +234 Connect festival to celebrate the Nigerian creative and cultural experience through a five-day event which will begin on the 28th of September through Independence weekend and will end on the 2nd of October.

This celebratory event will feature exhibitions, film screenings, master classes, conversations with filmmakers and artists, a concert with Eme&Huturu and the Cavemen.

It will also be an opportunity for the public to see the celebrated Benin Bronzes before they are returned to Nigeria.

The +234 event, named after Nigeria’s country code will highlight the art of Nollywood, engage with African creativity and expression, and engage the global African diaspora.

Visitors at the event will explore the creativity behind the inspiration of this festival through an art exhibition of  “Iké Ude: Nollywood Portraits” and “Before Nollywood:The Ideal Photo Studio”.

These artworks feature photographs of the talent behind Nollywood, as well as that of Solomon Osagie Alonge (1911-1994), who was the brain behind the first commercial photography studio in Benin City. This exhibition is carefully put together by the talented Iké Ude.

This five-day event will feature the screening of “Living in Bondage”, “Obara’m” on the 28th of September. On the 29th of September, there will be a short film screening and conversation with Akinola Davies, Boma Iluma, Orire Nwani and the Critics Company. The short films are  “Naked Woman”, “Ogun Ola: War is coming”, “Comfort”, “Lizard”, “Here Love lies”, “Black Mail”.

On the same day, there will be a masterclass with Nollywood actress Dame Taiwo Ajai-Lycett and another film screening and conversation on the film “Here Love Lies”.

A post shared by National Museum of African Art (@smithsonian_africanart)

On the 30th of September, costume designer and stylist Yolanda Okereke will take on another masterclass, followed by a screening of the film “Black Mail” with O.C. Ukeje and Obi Emelonye

To cap it all off, on October 1, the  Smithsonian National Museum of African Art will be putting on display some of the to-be-released Benin Bronzes which were part of the museum’s Benin Royal Art collection, due to be officially deaccessioned and returned to Nigeria in a private ceremony on October 11.

After this, the film “Invasion 1897”; which follows the invasion and looting of the Kingdom of Benin by the British and the calls for restitution, reparations and the return of artworks to Nigeria will also be screened during the festival.

This screening will be led by the film’s director Lancelot Imasuen, artist Victor Ehikhamenor, and Prof. Abba Tijani, director general of Nigeria’s National Commission for Museums and Monuments.

Celebrating Nigerian talent has become of great importance to the Nigerian creative space as it encourages upcoming creatives while boosting homegrown films. With the diversification of art forms in the country, creatives in the country have transcended film, and have found their way into other mediums such as sculpting, painting, comics, animation, pottery etc.

These divergent art forms have then become points of encouragement in the art space, giving credence to the quality of work Nigerian talent pull-off.

The +234 Connect festival is one such event that is aimed at celebrating the diversity in the Nigerian creative space.

The Smithsonian’s National Museum of African Art is a museum that focuses on Africa’s art across time and media. The museum boasts of a collection of over 12,000 artworks covering more than 1,000 years of African history and includes a variety of media from across the continent.

Founded by Warren M. Robbins, a former U.S. Foreign Service officer, it was known as the Museum of African Art and is located on Capitol Hill. In August 1979, by the enactment of Public Law 95-414, the museum became part of the Smithsonian Institution, the world’s largest museum and research complex dedicated to the increase and diffusion of knowledge.

The National Museum of African Art is located on the National Mall between the Smithsonian Arts & Industries Building and the Sackler Gallery of Art. The main entrance to the museum is located in the Enid Haupt Garden on Independence Avenue in Washington DC.

This celebratory event is set to promote the gospel of Nollywood in the global diaspora, especially with the movie screening line-up which brings to the table old Nollywood’s “Living in Bondage” and new Nollywood “Obara’m”.