Upon the news that box office movie sugar rush has been suspended from showing in the cinema, a lot of reactions have taken place on social media 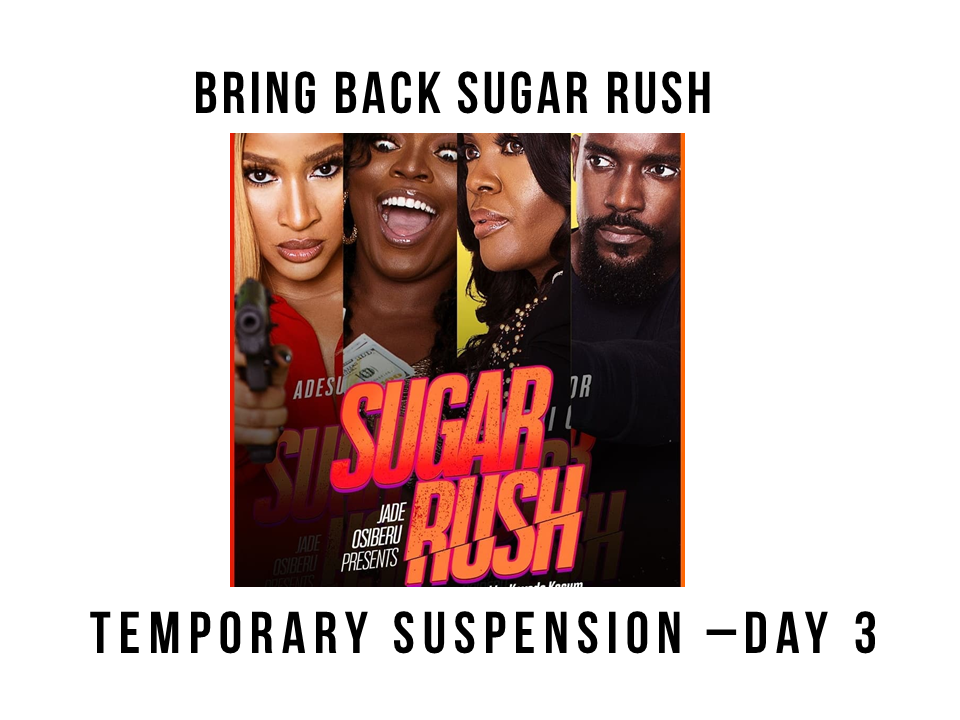 Here are what domestic audiences are saying about it

So I hear Sugar Rush has been pulled from the cinemas because a scene portrayed one financial crimes agency in bad light. If that is true, they are being silly.

What do they now want the CIA to do? Do you know how many Hollywood movies portray the CIA in bad light? Rubbish. pic.twitter.com/2QVRT7xa0g

Na only Nigeria own Dey different, one step forward ten step backwards. The sugar rush movie is entertaining and should not be banned because some agency feel it portrays them in a negative way.
#BringBackSugarRush

Yanking Sugar Rush because it embarrassed a government agency is wrong wrong wrong! It is quite clearly an absurd abuse of power! Agencies must understand that they serve the Nigerian people and not the other way around! Let the movie come back! #BringBackSugarRush

At the premiere of Sugar Rush, a part of me thought "I hope they don't ban this film for the subtle government criticism" and then I was like nahhh probably not, we're problematic but not THAT problematic.
I really underestimated our penchant for nonsense.#BringBackSugarRush

Do not punish creatives for being creative!#BringBackSugarRush

If only the government kept this same energy towards SARS issue. So sad! #BringBackSugarRush https://t.co/d3IgNOWWdB

Really and truly, what damage could a film like Sugar Rush do? I’m asking genuinely.

This is not a good look for us as Nigerians. It shouldn’t stand, and this embargo needs to be lifted to allow the film to run its course. #BringBackSugarRush

So I'm seeing that Sugar Rush has been banned from showing in the Cinemas because the EFCC was depicted in a manner that they find provoking. Nigeria is a big joke. By the time this ban is lifted, the movie will do greater numbers than it has done already. #BringBackSugarRush

I hope this all translates to additional publicity & brings in more viewers.
Because me I certainly want to watch it now. #BringBackSugarRush

It is really sad to see such happening in our movie industry. We do hope that Sugar Rush gets back to the cinemas in no time.

Experience The Cinema and More in Virtual Reality - Anywhere, Anytime