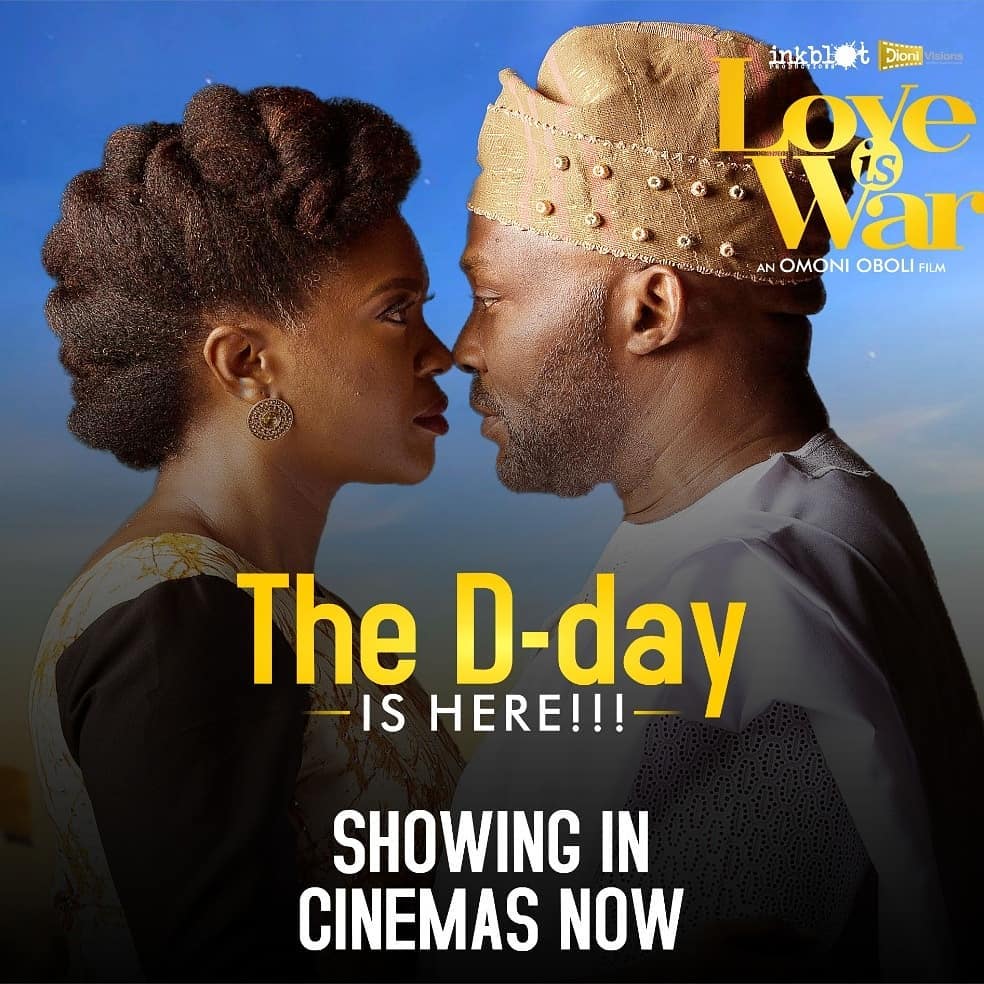 The film which debut on the 27th of September at the cinemas tells the story of a husband (RMD) and wife (Omoni Oboli) who both win the nominations as gubernatorial candidates of two major parties, hence making the couple contest against each other for the gubernatorial seat of Ondo State.

From what we gathered Dioni visions, a domestic film production company owned by the Oboli’s  teamed up with both inkblot productions and film one for the project and this will be their second time for a partnership. The company formed since 2002 has churned out drama film projects such as Okafor’s Law, Wives on strikes, Being Mrs Elliot etc. and has indeed cemented it’s household name with Nollywood audiences with the badge

The film project  screened in  44 locations total and the release date chosen by the distributors was quite strategic as it made sure it had no domestic or foreign debut competitions. This date gave the Love is War movie a chance to shine at the Box office, else it would have taken a huge hit if it debut alongside Hollywood’s Rambo and Ad Astra movie that was showing for the first week but has since slowed down as first time audiences labeled both films not that recommended.

And then again if it had been released one week after, it would have met the JOKER in a brutal clash that will leave the movie dead in the water in terms of visibility. Marketing was also edged to meet the Nigerian independence celebration date; hence we expect a steep rise for it’s full first week figures (15 million est) Switching gears to what the critics are saying, a couple of them rate the film Average.

Below are the Top Five Film for Last Weekend

The Fojo media production debut Romantic Comedy titled Kasonova at the 3rd week in the cinemas has earned over 17 Million Naira.

American action thriller  and serves as the third installment of the fallen film series debut back in late august and has grossed 174 million naira at the domestic box office here. It has spent over 6 weeks screening at the cinemas.

Inspired by the viral New York Magazine article, Hustlers follows a crew of savvy former strip club employees who band together to turn the tables on their Wall Street clients.

Cliaming the top 3 spot in it’s 3rd-week screenings, Hustler’s  movie has made a total of 43 million Naira.

Love is War is a comedy-drama about love, ambition, family and following your dreams. Written by Chinaza Onuzo and directed by Omoni Oboli, is about a couple who run against each other for governor in the same state

Total  Box Office earnings as at the time of this post stands at 8.25 Million Naira.

Thank You for Reading This. Check Back Every Wednesday for Nollywood Box Analysis.