From writers, directors, executive producers as well as critics giving their opinions on several topics that was being discussed, this all culminated into a Tweet Storm that the film industry truly needs for a more robust growth.

In this post we will be sharing with you how it all started, what you missed and the key takeaways you can part with. Let’s get the ball rolling.

A tweet by a writer with the handle @molarawood went sort of viral. It was about certain Nollywood films being over hyped when in case it was bullshit. According to her she said film industry was brewing films that had no good story and that was really wrong.

Overdramatic, ham-it-up performances are what is celebrated as great acting, often, in Nigeria.

Overhyped directors at start of journeys, still finding their voices, hailed as 'masters'

There's a certain anti-poor bent to the splashy new films being churned out by many Nigerian filmmakers that suggests that only the lives of the rich are worthy of representation on film.

Many filmmakers get away with the superficiality because we have an audience that did not grow up watching films. Cinema culture was decimated in the 80s. There's no cinematic frame of reference for many. Any new film pushed with superlative hype is the best they've ever seen.

We're seeing films with little or no overarching directorial vision, or outstanding sweep of artistry, no setpieces, dramatic ighting, nothing in the way a camera tells the story or directs the eye of the audience. Some actors play themselves in film after film. We say, "classic"

Let's not even get into the 'business' of Nigerian cinema. I won't; my business is art. But, so many films are falling over themselves claiming to be the 'biggest budget film' – *biggest grossing film ever at the Nigerian box office* – etc.

**We need to query these assertions.

I've spoken before about some of the recent films that I found meaningful, in that they were really trying to say something profound and challenge themselves, truly, in the art of film. 'Lionheart', 'Up North', 'October 1', to name few. Even a comedy like 'The Meeting' stands out

Quite a thread right. Now here are some responses, subtle clap backs and general comments

The way you people care about Nollywood sha, always a trending topic but we no dey see your money inside market.

People risk it all to make films without assurances. Borrow money. Shoot under unhealthy circumstances With few distribution opportunities just because they love the work and want to impress the audience. People who are hoping to get lucky in life are talking. Shut the fuck up

Hollywood doesn't produce that many films about poor Americans or the homeless. So one can't expect Nollywood to do the same.

Entertainment is aspirational. Nobody wants to commute from Ikorodu to VI five days a week – then relax on Saturday by watching a film on suffering.

Maxi that’s not completely true, Hollywood has made lots of movies about “poor situations” not necessarily poor people. Examples include Will Smith’s Pursuit of Happiness, slum dog millionaire, Grapes of Wrath, midnight cowboys, etc… In fact all of Charlie Chaplins movies

There are quite a number of Hollywood movies that explore poverty especially its parallels with race but these movies don't do well in the box office because as u rightly said, entertainment for many is escapism and should be.

The only thing I'll say about that piece of 'criticism' is that insulting the audience is never a good look. People need to get away from the toxic assumption that people who feel differently from you are stupid or uninformed. Maybe they just feel different.

As usual, you want @kemiadetiba to fail so you can be right and say “I told you so”. Very African. Witchcraft. You are wasting your time tho. KOB2 will triple the first and the commissioned series will hit. You want to know why…because you opinion is dead on arrival

I remember when The Set Up came out and I was worried about the reception. Someone said to me…Niyi, King of Boys has prepared us. I felt proud of @kemiadetiba with that statement. Your fancy opinion is a flake compared to the mountain of love and support the film has gotten

Standard playbook here. Deflect, deflect and deflect. We know the business is hard and criticism is harsh, but go easy. And saying filmmakers don't care what their consumers think is dishonest. https://t.co/jXnf1SXxax

People risk it all to make films. And so, no be wetin everyone dey do for their venture? Like we are not in this shithole together. Make dem criticise una small, una go dey say dem dey pray make una fail. E nor reach that na.

Lol! Criticism is an essential ingredient to refining a product, a system, a service, heck whatever else it is that one puts out there in the public.

If you don't want an opinion, don't put it out. Keep it enclosed/restricted from other eyes. Keep your sanity.

Sure and if you throw unnecessary Gbas our way in the guise of criticism, we will throw Gbos at you too. So everyone can calm down. 😁 https://t.co/RipQetOcbQ

A Postcript: I see gripes about need for people to enjoy things. There's room for all manner of films, especially crowd-pleasers. I'm all for films being fun & enjoyable to all. The caution is against the 'unmerited greatness' being conferred on some films/directors, that's all.

If you're in Nollywood and you consider critics (or this thread) to be mild irritants you'd rather do without, then we'll be swimming in mediocrity for a long time. Besides, that's not how the film environment works from Sundance to Cannes; all who want to up the game, know this.

Dear filmmaker, if anyone talks destructive mindless shit about ur work. Ask them what they do. Then remind them how shitty their profession is…Cos 90% of the time, you will be correct. People who are terrible at their personal jobs are calling themselves critics

Dear filmmaker: don’t do this. It’s a waste of your time. In fact if you can’t handle it don’t read them or better yet get into the banking industry.Ohhh I forgot, ur bank bosses will still tear you apart when they think your work is not up to par. Grow a thick skin filmmakers https://t.co/xlvBikQrhz

Dear filmmaker: don’t do this. It’s a waste of your time. In fact if you can’t handle it don’t read them or better yet get into the banking industry.Ohhh I forgot, ur bank bosses will still tear you apart when they think your work is not up to par. Grow a thick skin filmmakers https://t.co/xlvBikQrhz

I think Niyi is too sensitive for the craft he chose. Hopefully, Nollywood Critics will get some level of “authoritative” voice in the coming months.Then, he’d have to eat these ugly words.

No. Today’s is about coming to the defense of a colleague you feel has been attacked unjustifiably at her moment of glory. https://t.co/fIQpQLxfOq

Exactly! That write up was for all of Nollywood but most think it’s just about one person cos of the timing and many sentences that are obviously more than circumstantial https://t.co/0p0ZOUBONQ

My dear, they said we should make films for critics not the audience. Dun cry dun beg. https://t.co/juw4gXIPiu

Now you see why we called this a tweet storm…..

oh we are not done yet. There is still more that followed.

Great advice for anyone in any creative industry. Not everyone will like your work, they are not obliged to, it's not free money. I'd add: learn to appreciate (constructive) criticism. My students thank their peers who critique their works, whether they agree with them or not

You can only know a person hates you if you know of them so press ignore. A random person can say they don’t like your film, it will hurt but you have to toughen up cos that is what buyers of your product can do https://t.co/kC7r4Osa3q

I remember Steve Ayorinde's review of my first movie pained me sotay I wan Halla. My auntie said "are you mad? Steve that does not even review Nollywood films reviewed ur film in Punch for that matter & u are angry? He actually watched your film and spent time writing about it?"

She said, "write him thank him and then tell him where he may have got it wrong in your opinion". I took her advise o and it has served me well through the years. That was many years ago.

The thing Nigerian filmmakers, actors and actresses, and even the audience see movie critics as as enemies. They’re are not. Critics are mutually inclusive in the cultural spectrum.

I think I get his point… Not like we can't take criticism but 90% of the things we do in Nigeria is shitty compare to world standard… Have you seen a doctor in a Nigerian hospital or a lawyer in court or even our substandard politicians? But everyone wants to tk a swing @ us

If Nollywood producers waited until they could make the films that satisfied critics, there would be no Nollywood to critique.

I think we are neglecting the influence of film critiquing. Telling the filmmaker that he can do better isn’t an attempt to shame his work. Plus, this “money” as a measure for “success” is great but not progressive.

Criticism is evaluation, not condemnation..

It is an ego trip for the critic. It is the critic assuming that he/she knows more about filmmaking than the filmmaker.

Prescriptive criticism is the homing ground of amateur critics.

When you tell a whole industry what type of films they should be making, what qualifies as art and what doesn’t…that’s not you being a critic.

That is your Saturday showing under your Sunday.

Exactly!!! This is what I’m saying. That despite these issues- the audience doesn’t know what Nollywood practitioners go thru & constantly compare us to industries that have massive structures, better funding processes, grants etc. https://t.co/mLXHXQcTzw

For years I’ve been telling Nollywood that constructive criticism of our work by some means we are on the right track. It’s tough to hear but listening to only praise singers will kill your career. Many from a few years ago are struggling now cos they didn’t grow with time

I am most fearful of the people around me who won’t tell me truth with love. Those are the dream killers and they are so many in Nollywood that you almost have to wear a dagger cloak around. Above all know your strengths and weaknesses so that you can adjust as you climb higher

She made lots of valid arguments there was something to learn and maybe consider I believe that the industry only grows when we allow ourselves to engage in rigorous debates about art, commerce and audiences. Let's not be distracted by the hype, let's keep building Nollywood https://t.co/Teoc6BmCch

At this point, let’s cross over to Instagram for Jadesola and Imoh Umoren’s Comments and then wrap this up! 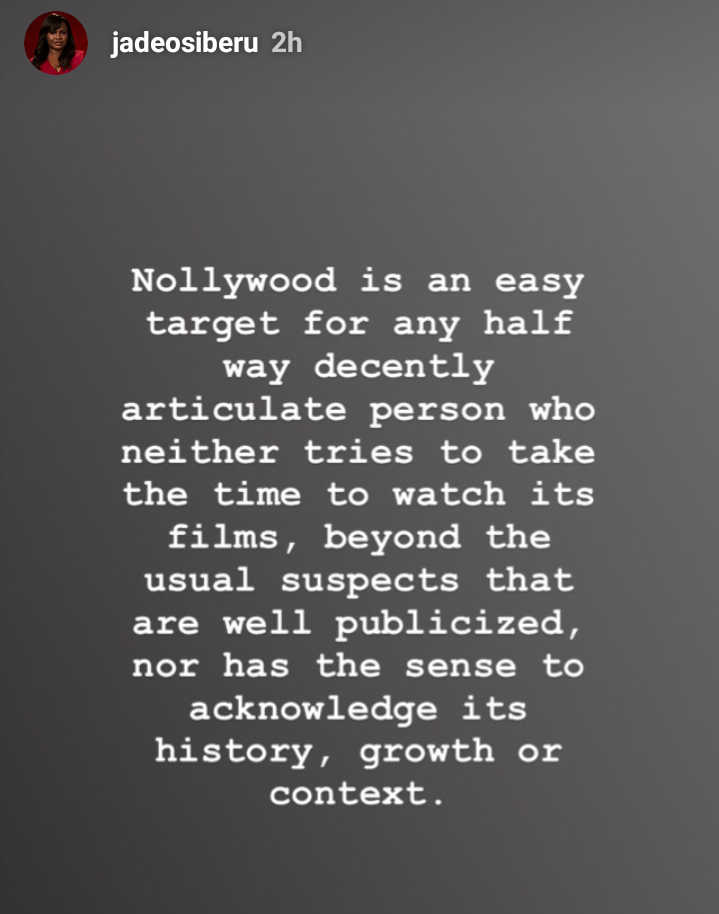 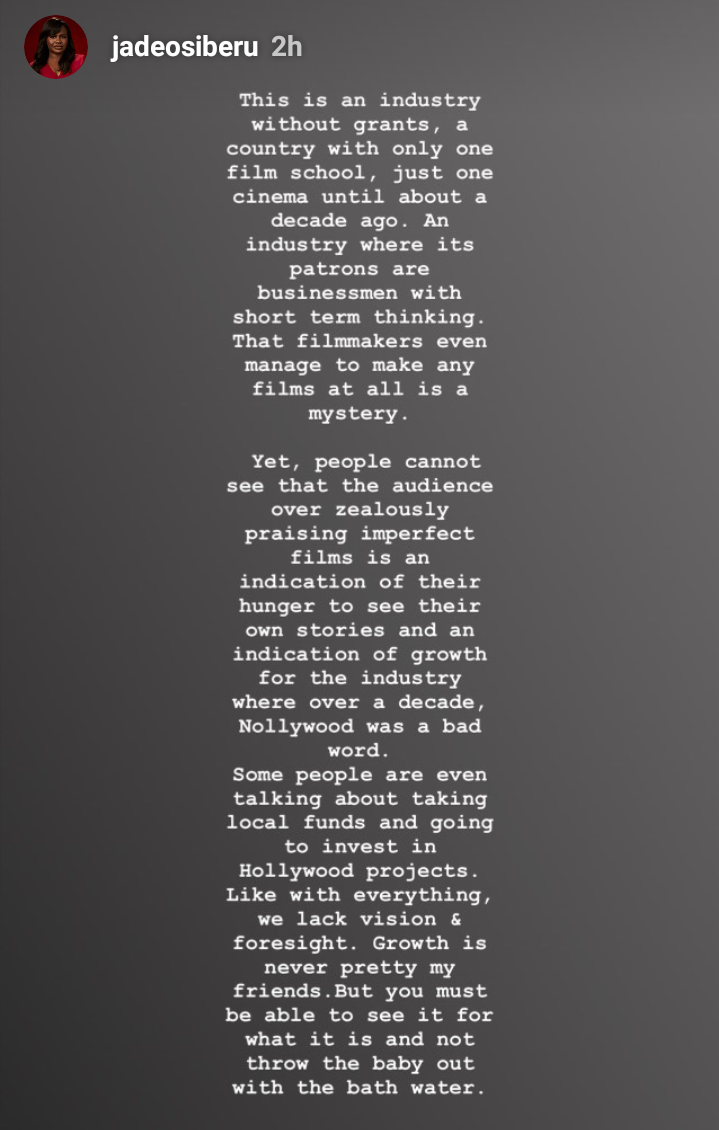 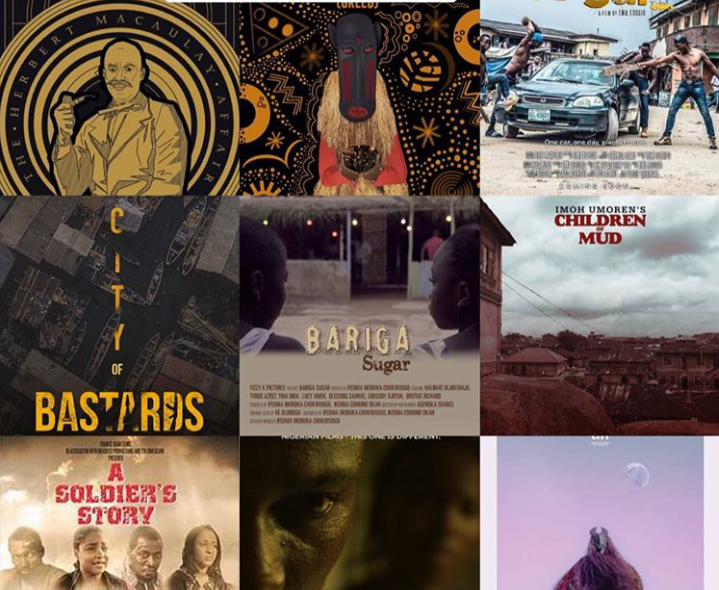 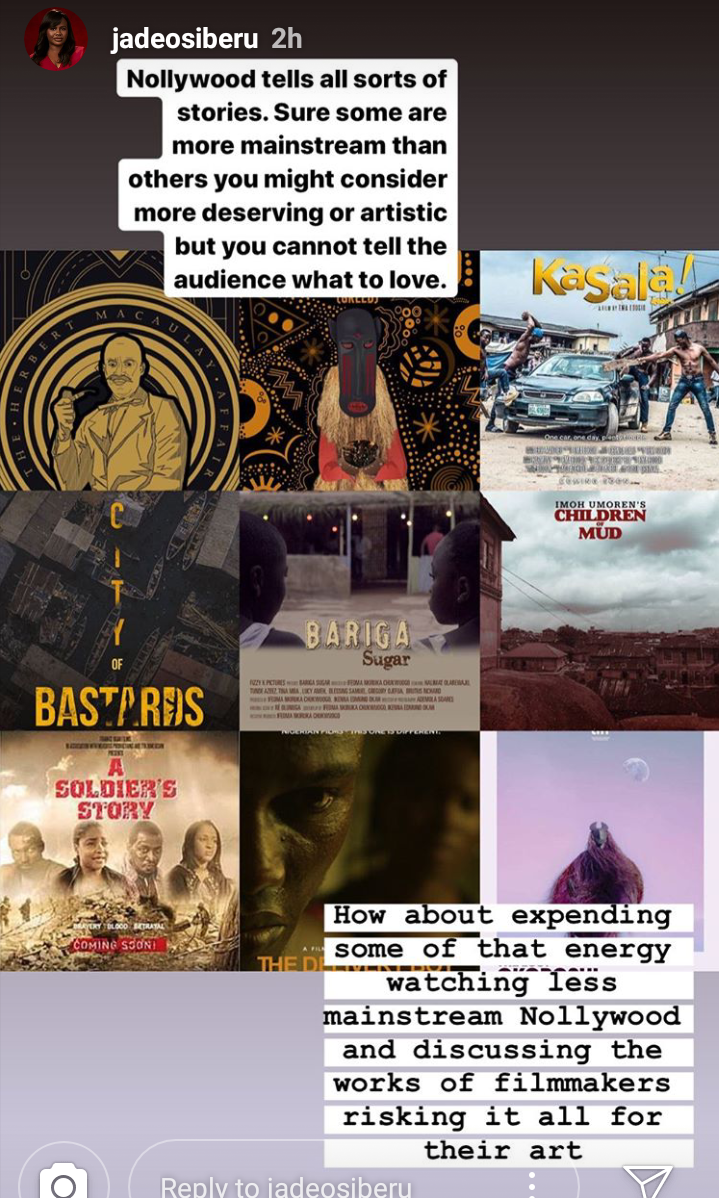 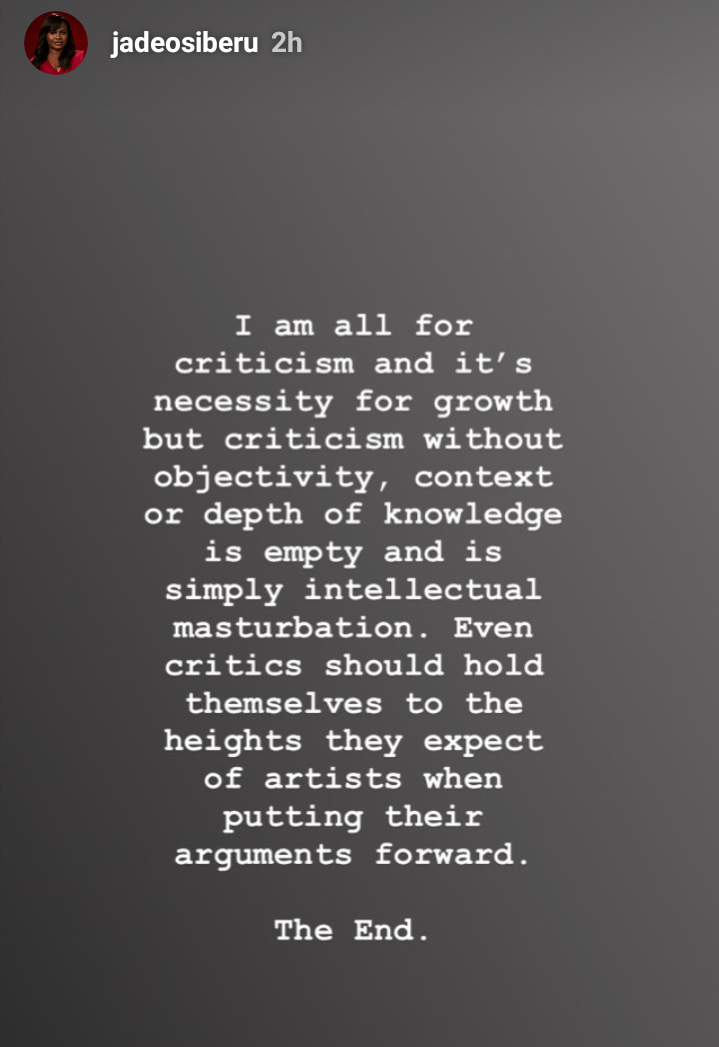 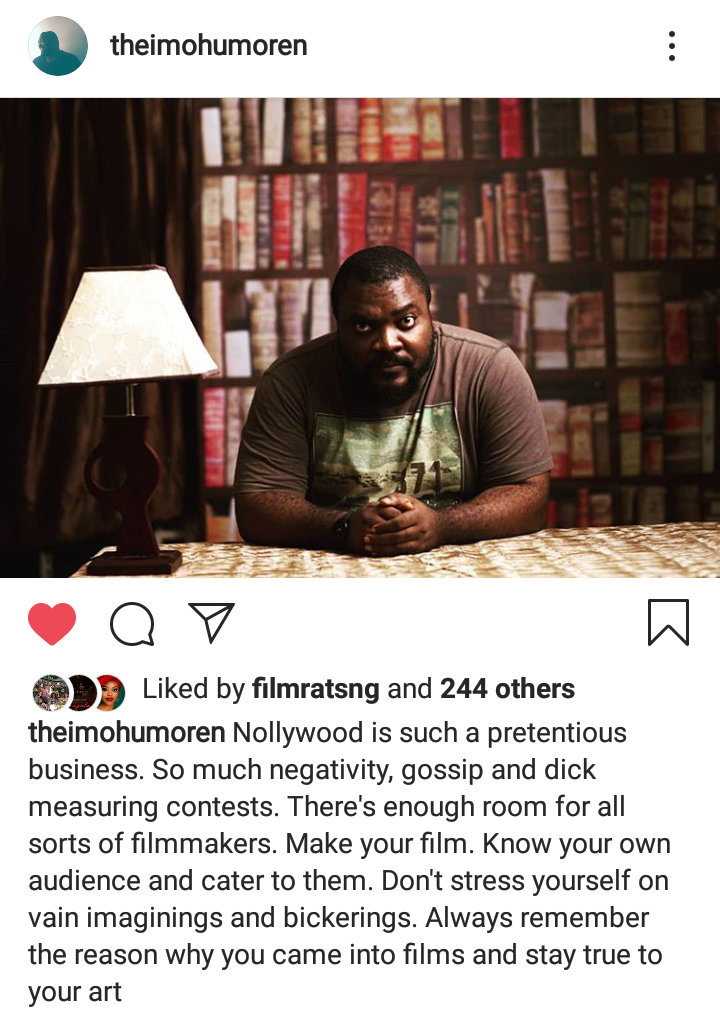 1. For takeaways,the domestic film making industry is still very much growing and should not be compared with other international counterparts.

2. Domestic Movie critics should and must be allowed to voice their opinions about films. They  are part of the film making ecosystem and truly beneficial.

3. Filmmakers should not be told what to do. Advise and move on. They have been in this game for long and they have firsthand experience of  what their Audiences will PAY for. Keyword on PAY!

4. The fact that this tweet storm  actually took place means domestic audiences now more than ever are paying attention to what domestic filmmakers are doing. This in fact means audience growth and penetration has increased for the past five years.

Film is a BATTLEGROUND – Sam Fuller