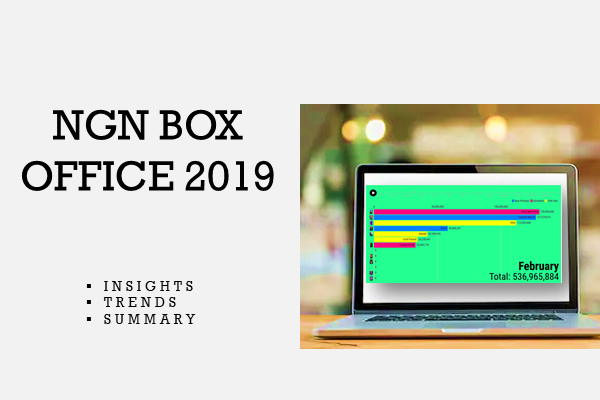 The year 2019 was indeed a remarkable run for cinema exhibitors in Nigeria with over 6 billion Naira generated in revenue.

Significant growth has been recorded in comparison to previous years and more milestones have been met especially in domestic titles revenue share, more titles crossing over the coveted 100 million naira mark as well new screens being built in the country.

With this momentum, one would project that 2020 would have been a much more stellar year with strong titles both domestic and foreign  smashing previous records  but oops – the global pandemic happened that made cinemas to be shut for more than 10 (Ten) weeks with zero revenue generated.

Hopefully, our new normal might fully kickoff this June and we will see how the numbers pick up again.

Enough words, let’s play the interactive 2019 data tapes – you can pause/play with the toggle button at the top left corner and also move the needle to the specific box office months.

Avengers Endgame, Lion King and the Hobbs & Shaw (fast and furious spin-off ) made a huge gross dent in the early third quarter of 2019

Nollywood Titles such as Sugar Rush, Merry Men 2 and Your excellency debut in the Detty December period with their earnings spilling to 2020

NOTES: Over 13 titles made above 90 million Naira with only four grossing over the 200 million naira mark in #NGNBoxOffice 2019

Distributors are the companies that have the exclusive rights for a movie title in a country/region.

This automatically makes them the middle man between the international distributor and Nigerian cinema owners.

Check out who made some huge returns in 2019

For genre, it is very obvious that sci-fi and action takes the majority of box office market share revenue due to the fact that Nigeria has a huge growing population of young adults

From this top 20 Nollywood Movies on this chart, we grouped them into four genres namely: Thrillers, Action, Drama and Comedy

Here is what we discovered

The 3 above mentioned domestic Thriller titles performed excellently in 2019 and therefore shows potential of unlocking more earnings if done right.

Film One is supreme in terms of domestic distribution, others should take a cue of their marketing model

The Risk of Doing Film Business in Nigeria

>> Access The 6th Edition of the NBC Code Here