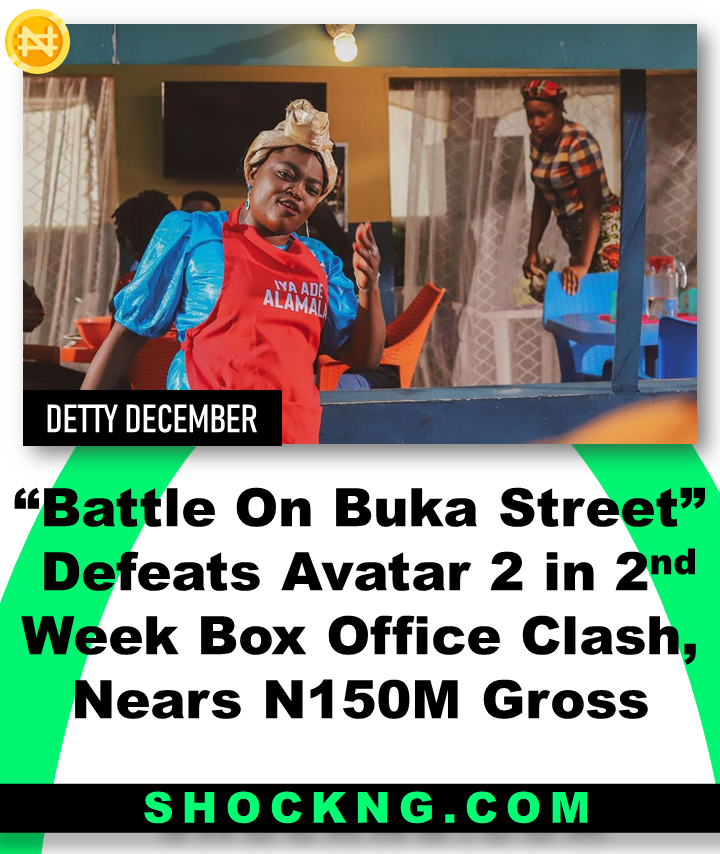 Launched on the same day, the 16th of December, “Avatar 2” and “Battle on Buka Street” were the highest-grossing titles at the Nigerian box office last week. While the former grossed N95.14 million, the latter opened with N86.63 million.

However, in the latest development at the cinema, the Nigerian comedy drama title has hijacked the number one position from the action/sci-fi film. This is not a very usual occurrence at the box office.

Currently showing in 71 locations across the country, as compared with “Avatar 2” currently showing in 67 locations, the Funke Akindele title made a weekend ticket sale of N48.21 million while its direct competition made N44.39 million. This has set the total cume of the movie at N135.08 million and “Avatar 2” at N139.63 million.

From all indications, the Christmas weekend favoured the Nigerian title as its distributor claims the feature pulled the biggest grossing day sales of N26 Million for the year 2022

But can this winning streak continue even in succeeding weeks, especially the last weekend of 2022?
Does this overtaking indicate that “Battle on Buka Street” has a chance of performing better than “Avatar 2” at the end of their theatrical runs?

How does a new Nollywood title with the same box office sales energy affect revenue and the legs of Battle on Buka Street?

Folks, we are all observing as it all unfolds

The final week for Detty December is here. Ticket sales haven’t been stellar as one would hope.

Demand isn’t back to pre-pandemic levels which might be a worrying metric for film exhibitors.

In the 3rd week of 2019, N313.83M was made at the Nigerian box office. The week realized these digits despite the emerging COVID-19 pandemic in some parts of the world. Movies that contributed to the figure include “Jumanji: The Next Level,” “Your Excellency,” “Frozen 2,” “Muna,”

The third week of 2020 experienced a very drastic fall from the previous year’s figures.

The sum of N95.02M was grossed. This fall is majorly a result of the COVID-19 lockdown that was imposed on Nigerians by the federal government as part of the measures to combat the dreadful virus.

Though the lockdown which was eased to night curfews ended long before December, movie-goers were still in fear of going to the theatre with their family and friends.

Among movies that grossed the two-digit figure was “Quam’s Money,” “Kambili,” “Rattlesnake,” “Introducing The Kujus,” and “The Croods: A New Age.” It is important to note that this list was dominated by Nollywood titles.

In 2021, the third week grossed N328.38 million. This was a great improvement over the meagre revenue generated the previous year. These movies enjoyed screen time at the time: “Spider-Man: No Way Home,” “Aki and Pawpaw,” “The Matrix: Resurrection,” 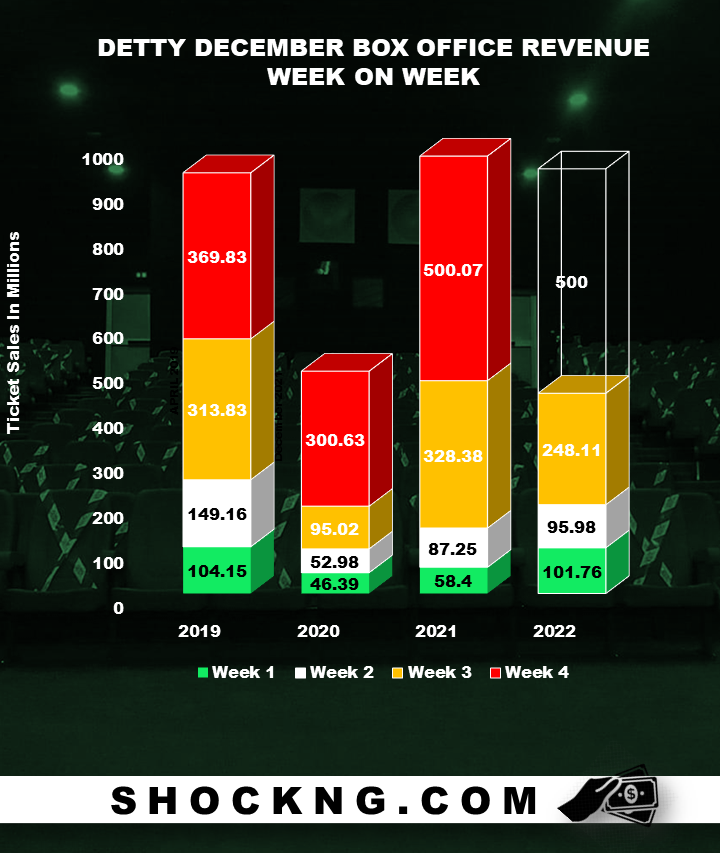