Having worked on several commissioned TV Series, Animation projects and even Films for the Box Office, Ava Momoh shared with us how exactly he transitioned into this career path.

Now if you don’t know, Sound Design is the art and practice of creating soundtracks for a variety of needs. It involves specifying, acquiring or creating auditory elements using audio production techniques and tools

On the other hand, a Film Composer creates the musical scores that accompany movies

Tell me your name, age and what problem do you solve for a living?

Hello, my name is Ava Momoh, my age is a special secret because I have told so many people so many different figures I don’t want to get in trouble.

I solve the “music” problem. When directors want to convey a feeling from what the audience sees to what they feel, I bridge that gap with music

I grew up in Lagos. I had a normal childhood as any middle-class kid.

My dad was a lecturer in Unilag. So I went to Unilag staff school, international school in unilag and University of Lagos.

I got a degree in philosophy. Graduated and Didn’t get a job. Gave myself one which is basically what I do today – Film Composing and sound design

*I actually started out producing music from back in unilag. I produced nomoreloss (God rest his soul), Blaise, Terry tha rapman – all them old school cats

Wow. Interesting. Tell me how did you get your first music producing gig?

I was doing Jamb lesson with a producer named Kevin. He told me hey, I make beats and then i asked how do you make them?? He told me I used this software and from there i started out to do beats.

I did not really get gigs, was just pretty much giving out beats for free to anyone interested and then I met someone who could rap and that was pretty much the first person I was producing.

I don’t remember the first person who actually paid me for a beat but I remember I spent a really long time giving away beats for free.

Let’s go into movies, how did you transition to that?

I was in Unilag year 2 – ish. And My uncle knew this movie producer named Emmanuel Ogogua. I told my uncle I produce music and he should hook me up with his friend so I can do music for his movie

I also figured it will better than all these artistes that couldn’t afford to buy beats. So my uncle hooked me up and I did it. The movie was called Love is gone. This was circa 2005.

And Yup! I was part of the people who used to make that old school soundtrack saying everything that happened in the movie.

So what’s your process like for any movie you sound design or compose for?

I basically talk to the director. Try to know the emotion he wants to convey with the picture. What exactly he wants the audience to feel and then go from there

After that I promptly ignore everything and spend a week agonizing over why I chose this profession, what I am doing with my life and why am I so hopelessly untalented.

So, after complaining for a week, I then say to myself “I gotta start writing some music” and so I’ll start.

Starting is the hardest part.

Tell me some of the movie projects you have worked in so far?

Geez I recently took a small detour from movies and delved into TV. Did a bunch of stuff for M-net. Like Jemeji. Forbidden, additional music for the Johnson’s, also working on a couple of new Africa Magic shows coming out next year.

The last movie I did was the Ramsey Nouah, AY movie – The Millions. 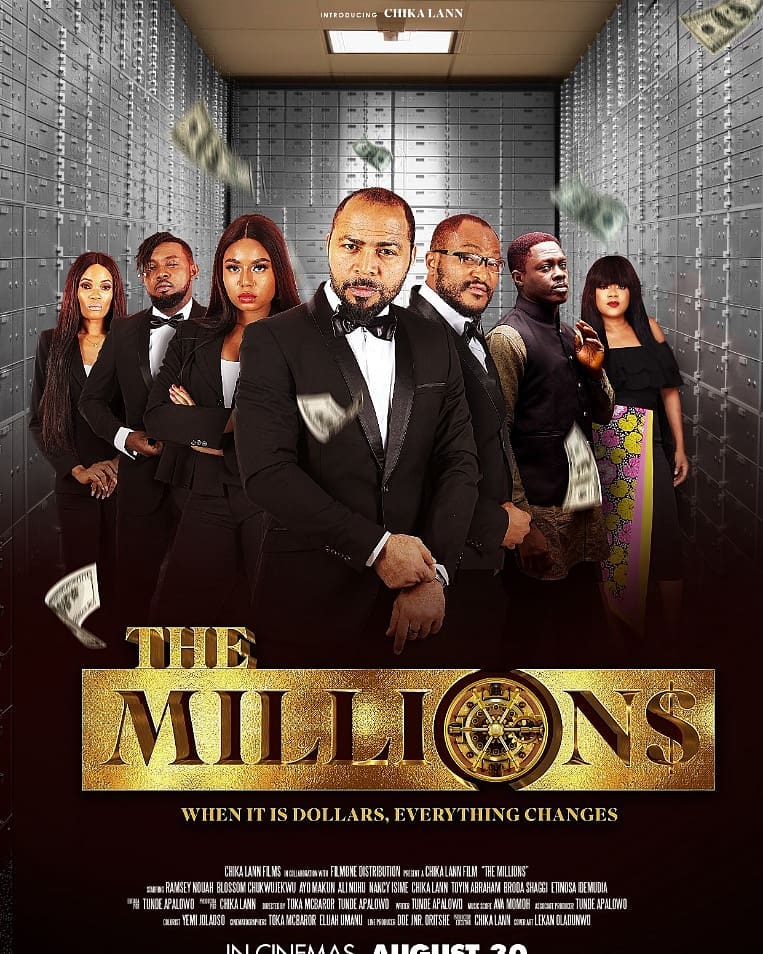 This year I also did a bunch of short films and Animation.

What has been your biggest obstacle so far?

I don’t believe I have any obstacles. I would say I am my own biggest obstacle. I know where I am now; I know where I want to get to. Time, hard work and dedication will get me there.

What do you consider as your sound design Breakout project?

I wouldn’t say I had one particular break out project. I’ll just say I had a bunch of little projects that made people want to pay attention to what I was doing. There are people who would watch a movie just because i scored it, and for me that’s huge.

But give me one project title that really made you happy that you are a sound designer? As a composer, I try to make the last thing I did be the best thing I did.

So that would be – Hero Corps.

Sound design is more of a team effort with my crew and me, so I can’t personally take credit for any sound design work

Tell me more about your team?

Lol. The team sounds like ten or 11 people. it’s really just two guys who focus on sound design and effects while I can put all my energy into the music. We work on TV shows every week and it helps to have people you can rely on.

One of them – Tobi, actually has a 9 to 5 but makes himself available at 3 am for my endless wahala.

Haha. Interesting How do you chill when not working?

When I am free, I really just like to chill and do nothing. Just lie down and enjoy the tranquility that comes with not worry about deadlines and no one reminding how dire their situation is if they don’t have music ASAP.

*LMAO, I totally get that deadline part

Yes. Nigeria. What’s wrong with it?

haha! where do we start? The only thing that is not wrong with Nigeria is the resolve of it’s hardworking people. Nigerians work hard and stand out everywhere we go.

How much do you earn as a sound designer? A range will be fine

lol. I’d like to point out that I am a film composer and sound designer.  And I think it’s quite crude to talk about money. I take care of my family, pay my bills and no one is chasing me for money.

So I guess I’m middle class – If at all it exists in this country.

Are there other individuals like you doing what you do?

There are many others! While I delved into TV my counterparts were dominating the movies – Kulanen Ikyo who did Lionheart and a bunch of other movies.

Michael Ogunlade who did Bling Lagosians and a bunch of other movies and Kolade Morakinyo who did the recently released Love is war.

There are others doing great work. While I may have exaggerated and said “many” I can’t actually count up to ten.

Which international film composer do you check out their work regularly for inspiration Ditto sound design?

my top sound designer is Erik Aadahl. He is responsible for the iconic transformers sound

Oh bry ty! That’s what I call him when we hang out in my dreams. I love his work so much! His iron man theme is the second best thing after the avenger’s theme

What’s the Future of Film composers here in the country, also what do you think can be done to facilitate more of you guys?

It’s a growing field. More people are getting into the business every day and I think that’s amazing. However, the thing with being a film music composer is that it’s really one of the few parts of the movie-making process that is dispensable.

People have been downloading music from the internet for their movies for ages.

But If filmmakers start to see this process as a necessity. Like an editor. You can’t have a movie without an editor. Then there can be progress.  So in order to facilitate more film composers, the moviemakers just need to create the demand and they will come.

What’s something you want to do in your career but scares the hell outta you?

Nothing I want to do scares me. What scares me is what I don’t want to do – which is quit or fail. Or to work so hard for so long and just have no one remember you for what you did.

Has someone ever rubbished your any of your work before? If yes. What did you do?

Some people will like it but they may not like you. No one has ever actually rubbished my music. Although this one guy, I did a short film for him about 5 years ago.

He didn’t like the music and quietly replaced it with something else and never mentioned it to me.

Instead of just calling and telling me, the individual then went around telling people “Ava is not good”

What do I do? I take it in good stride. I let the work speak for itself. so when someone gives the “ava is not good” word they would turn to him and say “Nah bro. You, don’t know what you’re talking about”

What’s your take on this Social media bill our electorates are trying to force on us?

I think we have a big problem in this country that is sycophancy. Like when someone is in office just like Buhari. They say he is the best, he is awesome.  When in fact, he is not.

Nobody dares to says oh, he messed up and everyone just wants to kiss his ass and kiss it constantly.

Now when this happens a lot esp. when they are in the position of power they become a crazy megalomaniac.

They don’t want to hear any criticism, just want to constantly hear positive reassurance – I feel that’s the root of this bill for people in the office who have been surrounded by sycophants 24/7,

So now, they cannot stand to go online and hear negative things about them and then they came up with this stupid bill which they even copied word for word from another country and just wanna impose it on us expecting us to sit back and do nothing!

Screw the bill and screw everyone that supports it

Thank you for Reading. Follow us on twitter  @ShockNG for Movie Trailers you don’t want to miss

Jide Kene Achufusi : The Face of a Nollywood Blockbuster