The Story ⚡
Organizers of Lagos Comic Convention, widely recognized as the biggest geek and pop culture event in Africa are getting set to welcome over 10,000 fans, enthusiasts, professionals and business heads in the creative industries of comics, books, films, animation, gaming, VR, and others. 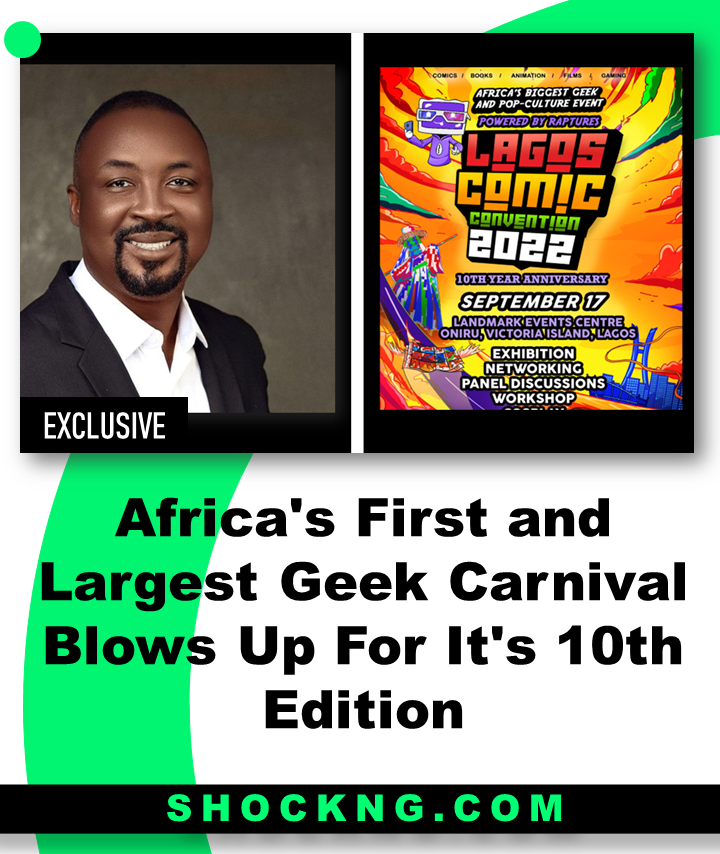 Tell Me More
Being the very first in Africa, the Lagos Comic Con powered by Raptures.io has long established itself as a vibrant hub for showcasing the finest of Africa’s creativity in these fields while tackling core challenges facing the creative space.
This year’s event proudly sponsored by Raptures.io will hold in various halls in the popular Landmark Events Centre, Oniru, VI, Lagos on the 17th of September and the Film One Cinema which will host the Film and Animation zone activities all within the Landmark village.
This year’s edition, just as in previous years has enjoyed fabulous support and love from the French Embassy in Nigeria and would host several guests from all around the world, especially from African countries like Cameroun and DRC. 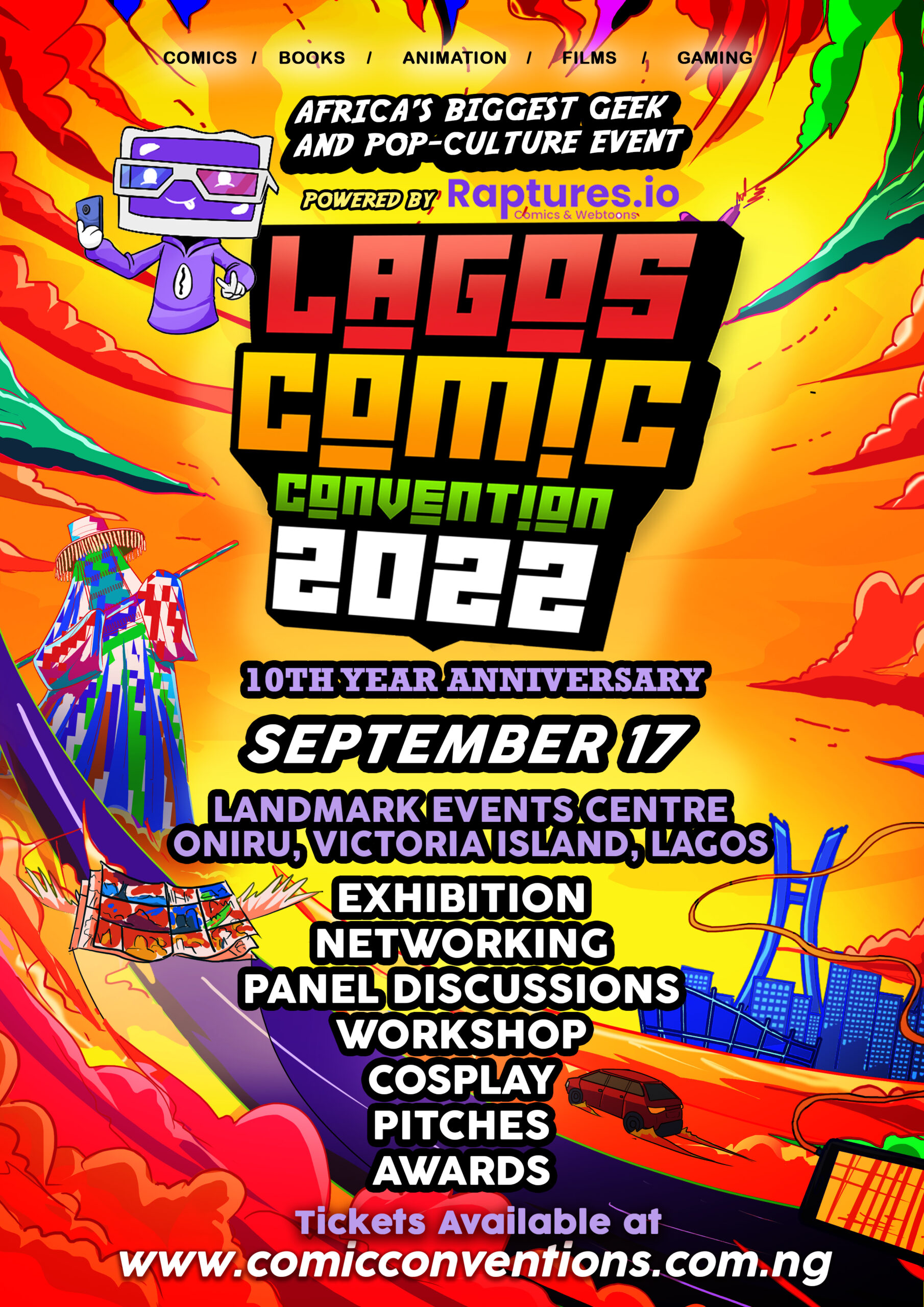 In its 10th anniversary, lots of regular features are expected to come back bigger while new programs are also lined up to wow the geeks onsite or online.
According to Ayodele Elegba, the founder of the event, Lagos Comic Con 2022  will be a celebration of the African culture and the resilience of African creativity to bounce back after the COVID19 pandemic and keep pushing the boundaries globally.
This vision has drawn rich support from diverse players in the corporate and creative spaces with zone sponsorships from Zebra Comics, Creath, ULesson, FilmOne Entertainment, Spoof Animation, Naphtali Books, DOJ Gaminz and others.
Over 70 businesses in diverse sectors are expected to exhibit products and services to the massive audience made up mostly of young upwardly mobile Africans. There will be 32-panel discussions and masterclasses on key topics happening in the VIP Halls of Comic, Books, Animation and Film Zones. These sessions will feature over 120 elite players in these sectors. Cosplayers are more than excited to return to the main stage with flamboyant displays of superhero get-ups from Hollywood, Manga and even African comics.
One of the most exciting news about this year is that creative pitches are making a comeback to Lagos Comic Con. Once again, aspiring creators will get the opportunity to pitch their concepts and win prizes.
In the book zone, 2 authors will get free publishing deals with a sign-on fee of three hundred thousand naira from Naphtali Books plus major publicity benefits from Lagos Comic Con. At the Comic Zone, 2 comic creators will get their comic books published by Zebra Comics, promoted for free by Lagos Comic Con and given free Exhibition spots to sell their comics at the 2023 event.
One animation creator will get his/her dream come true, using the Spoof Animation team to produce their short film. For the Film Zone, a monologue challenge will see 20 aspiring actors will get a chance to perform before prominent Nollywood actors, directors and producers and at 2 winners would get an automatic role in movie production.
Other activities include stage performances, red carpet events, VVIP lounge and bar, gaming events, movie spotlights, books and comics launches, film premieres and lots more.
Tickets are actively going out and you can get yours at www.comicconventions.com.ng where you can also get more details about the event including Exhibition and marketing details.
You can reach the organizers via email at [email protected] and WhatsApp on 08131979457. 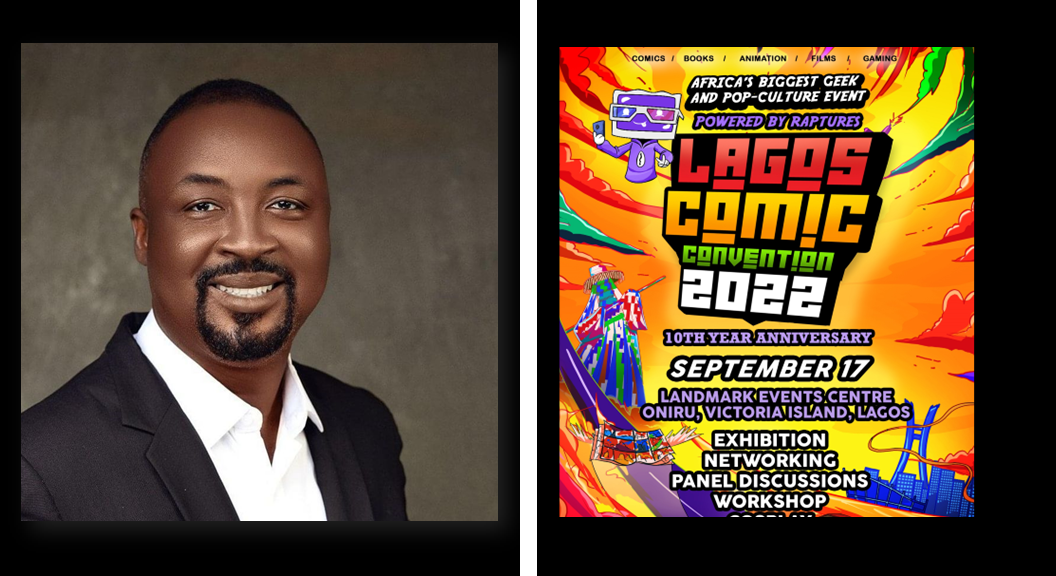 Vincent Okonkwo on Making Films For The Big Screen in Nigeria